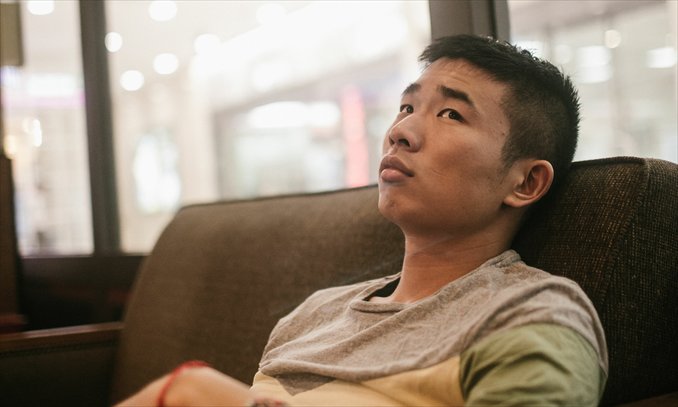 Fan Popo is a queer filmmaker and general agitator, and has been known to call himself a lesbian. He made headlines this year for suing Chinese censors after his documentary Mama Rainbow, about Chinese mothers of queer adults, disappeared from the internet. With the sequel almost finished, Apopolis caught up with him for a quick chat.

Can you tell me about your new project, Papa Rainbow?

Papa Rainbow is a continuation of Mama Rainbow, but will be a very different style. We ran a theatre workshop where six fathers of LGBT adults shared their stories and devised a play. In the play, they play the role of either mother or child. It’s a very interesting challenge for them. We’ve done a rough cut and working on the final cut.

Why did you decide to use performance in this film, but not Mama Rainbow? Is there a difference between mothers and fathers?

Usually, Chinese men are supposed to be more masculine, so it’s not so easy for them to show their emotions. The families we shot are very accepting, so we wanted to give them a challenge. The fathers were more open than I expected.

You’re very absent in your films, even when the subject is personal to you. No narration, rarely on screen. Why do you choose to remove yourself?

I’m camera shy. Even when I’m interviewed in the media, I don’t do well. But I really admire documentarians who put their lives on screen, for example Stanley Kwan in Yang±Yin.

I see the topic in this film from a certain distance, so it’s more comfortable for me to do it this way. But I don’t know what will happen in the future. I’m thinking about making a documentary about my own family.

You are a very prominent Chinese LGBT figure, and you are often approached by international media for comment, either about your work or issues in general. Do you feel you are well equipped to be a spokesperson for Chinese queers?

Unfortunately, in China the media has very limited space to report LGBT topics, which makes international media a very important platform for us. I usually have a good experience with journalists; they give me very good questions and new ideas.

I can only speak on behalf of myself though. I am just one queer filmmaker, and it’s dangerous for people to think I can represent the community, because everyone is different. I’m always very careful of this when I speak to media, I always say, ‘This is my personal idea.’

Do you think there are misconceptions about LGBT life in China?

Some journalists ask questions like, ‘Has homosexuality been legalised in China?’ and I really don’t understand these questions because they could google it. One even asked me, ‘What’s the meaning of the rainbow flag?’

I still think a lot of Western journalists treat China as a very exotic place. They see everything in a very post-colonialist, orientalist way. When they see Mama Rainbow, they think, ‘Your film is too positive, you’re not showing the reality in China’. China is conservative, but it has many angles, many sides.

Do you think people in China have misconceptions about LGBT in the West?

Most images of Western LGBT are gay marriage and gay pride, so this also makes a stereotype that the West is always open. But you also have religious and conservative people.

You’ve described yourself as a male lesbian. You play around with labels a lot, could you say a little about this?

Personally, I hate labels, I don’t put any on myself. But for convenience sometimes you have to introduce yourself…you’re a filmmaker, an activist. But when I’m asked by others if I’m gay or not, I will usually say I’m a lesbian. It’s related to my sexuality, but also to the community I belong to. I have a lot of lesbian friends, we hang out together, and I feel part of them. Even when I have sex I use fingers quite a lot.

I would put on a label if a certain group of people was discriminated. If a Trans person was not welcomed in some place, I would say I am transgender. In Beijing, Tibetan’s are discriminated against. I would stand up and say I’d like to be neighbors with them, because I feel I am on the same side as them. This is what labels mean to me.

Fan Popo lives in Beijing. Papa Rainbow will be released next spring.