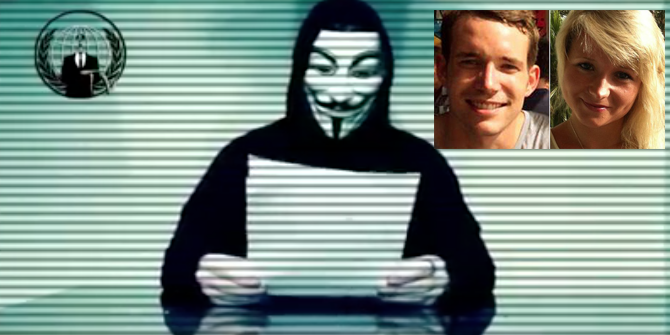 Following the guilty verdict in which two Myanmar migrant workers were sentenced to death for the 2014 murder of two British backpackers at Thailand’s Koh Tao, Anonymous retaliated against the injustice by shutting down 14 Thai police websites. On January 6, homepage of some of the police websites had been replaced by the picture of the Guy Fawkes mask with the message “Failed Law We Want Justice! #BoycottThailand” across the screen.

Myanmar migrant workers Zaw Lin and Win Zaw Htun were found guilty on December 24 for the murder of David Miller, 24, and the rape and murder of Hannah Witheridge, 23, whose battered bodies were found on a the beach in September 2014.

Although the men initially confessed to the murders, they later withdrew their statements. They said that they had admitted to the crimes because the police had tortured them, a practice that is unfortunately far too common in Thailand. According to the Guardian, Burmese official Aung Myo Thant said the confessions were “beaten out of them. … They told me that they were on the beach that night drinking and singing songs. They said they didn’t do it, that the Thai police beat them until they confessed to something they didn’t do. They’re pleading with the Burmese government to look into the case and find out the truth. They were a really pitiful sight. Their bodies had all sorts of bruises.”

On January 3rd, Anonymous released a 37-minute video detailing the extensive homework they had done before arriving at their decision of hacking the police websites.

Anonymous has learned that the Thai police has accused innocent people before and would rather blame foreigners or migrants for such crime so as to protect their tourism industry than accuse their own Thai locals that may deter tourists from choosing Thailand as their holiday destination.

This is the latest chapter in the case that has confounded the international media and raised serious concern with Amnesty International. The less-than-competent investigation was shrouded by several inconsistent reports made by the Thai police, crime scenes contamination, failure to collect DNA samples from the weapons and police corruptions. The treatment of the case by the Thai officials raised eyebrows when Thai Prime Minister General Prayuth Chan-Ocha at one point blamed the victim for wearing bikinis. To regain public confidence, the police conducted, filmed and released a disturbing crime scene reenactment a month after the murder which was viewed as insensitive.

The desperation of the Thai authority is rooted in Thai tourism industry which brings in more than 25 million foreigners each year. To have violent crimes committed by Thai locals and public confidence in Thai police decimated, it will inevitably have a major negative impact on its tourism industry. This explains why, after the Anonymous hack, police spokesman Dechnarong Suticharnbancha ensured the media, “Even if the source of attack was from abroad, they will be convicted eventually. It’s not a problem. Thai police are excellent.”

Whatever confidence the Thai authority is trying to raise, Anonymous made sure  to discourage anyone watching its video from visiting Thailand until “Thai police make many changes in the way they handle rape and murder cases involving foreigners or migrants and show more respect to deceased victims.”

Below is the 37-minute video released by Anonymous last week.