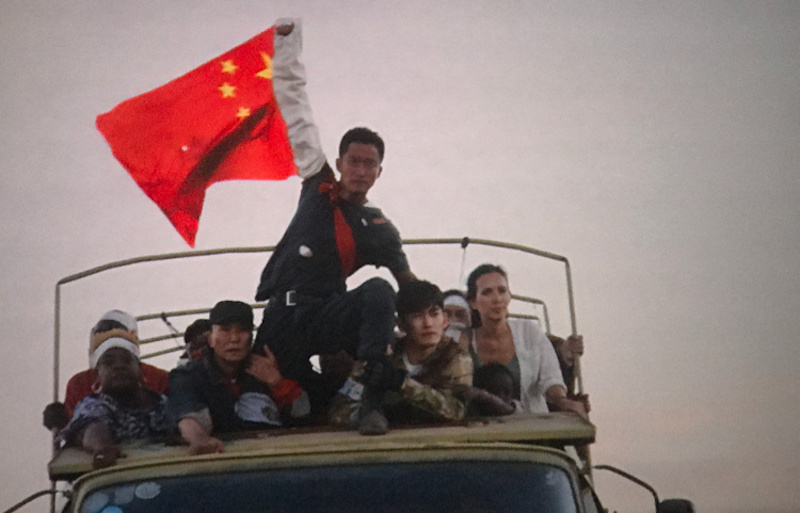 Besides breaking all box office records in China and showing that a Chinese film can single-handedly dominate the international box office, Wolf Warrior 2 marks the birth of an international Chinese action hero—Mr. Wu Jing. The story is essentially Die Hard with an ex-Chinese military guy chasing the tail of the killer of his love interest to an African country where he ends up caught in the crossfire between two clashing African military regimes.

Is Wu Jing cool? Not exactly. Is he a badass? YES!

Wolf Warrior 2 tops Western action pictures with a spectacular combination of gun fires, car chases, weapons of mass destruction and martial arts action. Just the major car chase and the final tank-on-tank combat sequence make the movie worth the price of admission, though the footage of the Chinese warships look like they were either stock footage or shot with a GoPro camera.

Without a doubt, Wolf Warrior 2 is a Chinese flag waving propaganda film. Before the final credits, there is an image of the Chinese passport dominating the big screen and subtitles saying that overseas Chinese will be protected by Chinese embassies. The film also positions China to be a benevolent international political power; the Chinese just want to stay alive and be out of trouble and they are indeed literally save by waving the Chinese flag at the end.

Regardless of its politics, Wolf Warrior 2 is a landmark Chinese film considering both its box office and its admirable technical feat of making a truly successful piece of international mass entertainment which is perhaps the best propaganda of all.