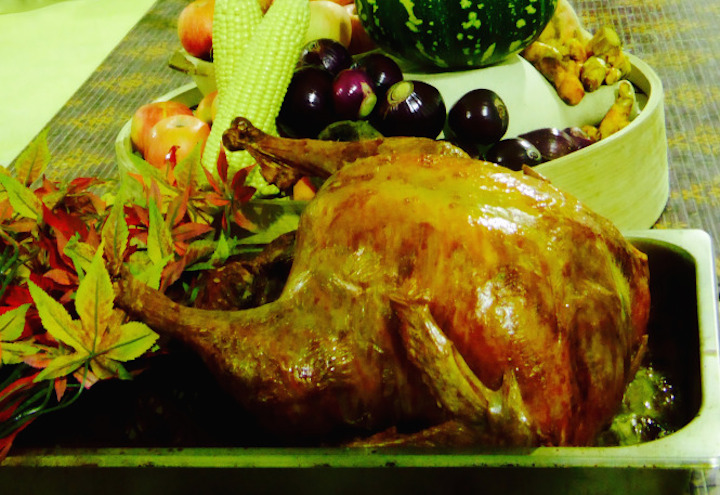 Hungry Empress Joan Chen was on set in Malaysia for Thanksgiving and wrote:

“Before he died of cancer,  the acclaimed author and neurologist Dr. Oliver Sacks wrote a set of lyrical essays for the New York Times.  I was deeply moved by his passion for life and his courage in facing death.  Every Sunday from spring to summer this year, I looked for his writing until one day, two weeks after his moving final essay Sabbath was published, I read that he had passed away.

On this Thanksgiving day, I will share a passage from one of his essays as a way to give thanks to everything I have in my life: “My predominant feeling is one of gratitude. I have loved and been loved. I have been given much and I have given something in return. Above all, I have been a sentient being, a thinking animal, on this beautiful planet, and that in itself has been an enormous privilege and adventure.”

Thousands of miles away from home, I shared a wonderful Thanksgiving dinner with the members of my extended Marco Polo family in the catering tent.  Yes, we eat in a large tent like boy scouts on a camping trip, except we make a TV series instead of hiking, and the outing lasts much longer and takes place across the ocean. Once when I was feeling homesick, I lamented about the traveling circus lifestyle that we lead as film people. Our producer John Fusco shared with me a Van Morrison song called Caravan, which lifted my spirit.  As I snapped the pictures of our international crew streaming into the catering tent on Thanksgiving night, the song Caravan played in my mind: “And the caravan has all my friends. It will stay with me until the end…””