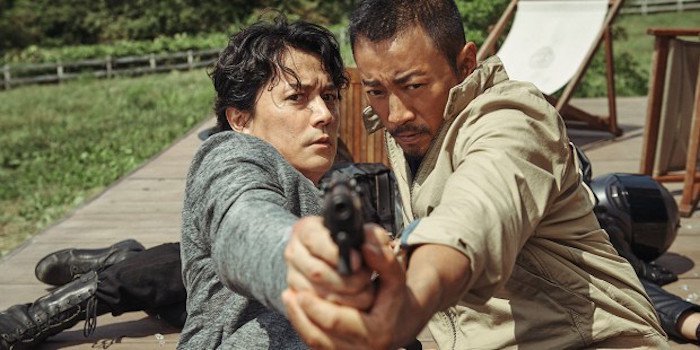 Ridiculous, gratuitously violent and choppy storytelling are the least of the problems of John Woo’s latest action picture Manhunt that suffers from stale action sequences and cheesy cinematic techniques that once trademarked John Woo as the pioneer of action cinema. Sadly Manhunt feels like John Woo was some young director trying hard to imitate John Woo but fails only to realize that it’s Woo himself who regurgitates his own cinematic style that feels so outdated and distracting.

I saw the movie in one of the newest and best movie theater called Palace in Gunagzhou, but I could still see the artefacts of a not-so-well-done DCP on screen. This is a mega-budgeted John Woo movie and the DCP really shouldn’t be that bad. The DCP made you feel like watching the movie on a large LED television screen.

Adapted from a Japanese novel, the movie becomes so outlandish in story and logic in the second and last act that one wonders what went wrong in the filmmaking process. Was it the development or execution, or both? For a fan of John Woo, this is a massive disappointment made by a ghost of the John Woo we knew.