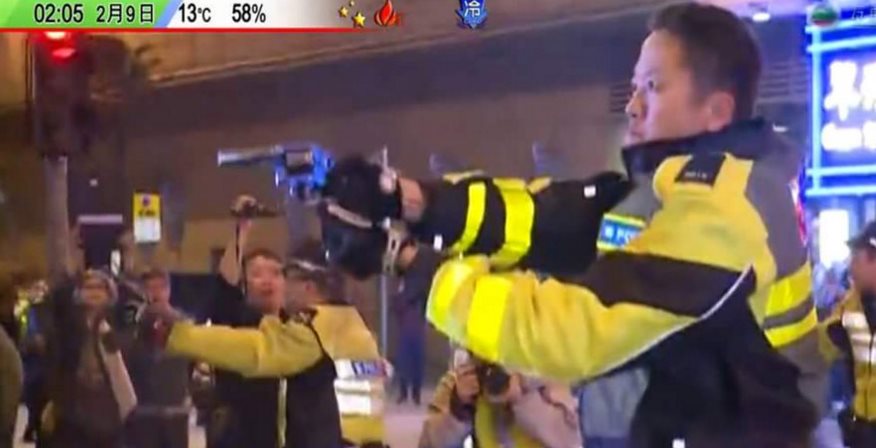 Last night and in the early hours of this morning, riots and police confrontation took place in the Mong Kok district of Hong Kong. The violence, which saw around 100 arrested and numerous people injured (including civilians, police and journalists), purportedly began as a reaction to sanitation officers trying to shut down unlicensed street-food vendors. However, the ensuing ‘Fishball Revolution’ was buoyed by what appeared to be a pre-organised protest by anti-China self-determinist group Indigenous, as well what is implied to be an underlying distrust for the HK police. The headline grabber has been the two ‘warning shots’ fired by an officer to disperse crowds, whilst social media is aflame with video of beatings, vandalism and arson.

In the immediate aftermath, it is difficult to give any solid analysis. And whilst I used to live in Hong Kong, and have followed the ins and outs of the unrest of the past two years closely, I am currently in Beijing and didn’t witness last night’s events. My understanding comes from local news media and speaking to friends who were there. A few things stand out to me though.

Police were brought in when food sanitation officers were met with hostility after trying to shut down unlicensed street food stalls. Rightly or wrongly, it was a measure designed to protect public health. Whilst that sucks for seasonal tradition or general pangs for fish balls, these were officials doing their jobs. Maybe more licenses should have been issued by the government, maybe unlicensed vendors should not have gone onto the streets. But this was not a major insult Hong Kong, nor was it a major impeachment of rights.

“Don’t move, raise your hands, put down your weapons”

What has been done by the police to address public relations in the past 5 years?

The reputation of HK police has been severely tarnished in recent years for perceived politicisation of its remit, at a time when the people of Hong Kong need reassurance about the end of the handover to China. WSJ argues that this has been largely the responsibility of former Commissioner Andy Tsang, one of a string of civil servants apparently more concerned with Beijing than with citizens. We are still seeing the reverberations of the social-media friendly Umbrella Movement across the internet, driven by groups like Scholarism, Indigenous and HK Valiant, alongside publications like HK Freepress. In such an environment, attempts to prosecute largely non-violent protestors and failure to discipline violent police officers have not gone unnoticed. When a crowd with this mistrust is greeted with riot police, it is no surprise that their reaction is one of anger, fear and resistance. At time of writing, the police have yet to issue a satisfactory statement on the events.

Why are Hong Kong’s police armed?

There is little to no gun related crime in the territory, with low gun ownership. Violent crime across the city is relatively low. Old people read newspapers in the park at night. Even without this, why are the police of such a densely populated city armed? Many of today’s reports internationally headline some variant on ‘Police fire shots into crowds.’ The justification given was that it allowed police to regain control as rioters briefly retreated. But even the tear gas canisters, so odiously used in 2014 and giving the Umbrella Movement its name, or the rubber bullets currently amassed in the legislature building, are surely preferable to a bullet?

Whilst it was labelled ‘Revolution’ by the international media, local Hong Kongers were careful to use the word ‘Movement,’ even going as far as protecting the Chinese flag on National Day 2014. How representative are Indigenous and groups like them? In the words of one activist I spoke to who was at the scene, ‘They just want to come out on top.’ There are times when it is necessary to go into the streets and fight, which is presumably why their candidate for LegCo, Edward Leung Tin-Kei was among those arrested last night. But when the majority appear to favour peaceful dissent, passive resistance and dialogue, and when there is such disdain for police-inflicted violence, is this the time to burn the streets of Hong Kong or to take the moral high ground?

One final thought comes form an excellent piece by Chris Cocking, a few days after the Umbrella occupation began. He quotes assistant Metropolitan Police commisioner John Aldgreave on police tactics at mine worker picket lines in 1985,

The Hong Kong Police Force was established under British colonial and has been criticised over the past 60 years for corruption, aggression and poor judgement. As anti-China groups wave British Flags and condemn recent police tactics as serving the will of Beijing, it is important to remember where these tactics were born, and how the PTU paramilitary style is now being used in the UK. Law enforcement in Hong Kong perhaps needs serious attention before it wins back the trust of the people, but localists need also to look beyond a rosy view of pre-handover.