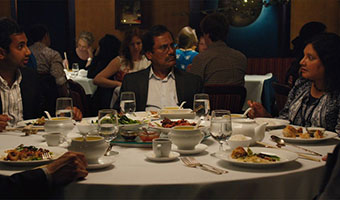 Best known for Parks and Recreation, comedian Aziz Ansari swaggers his way into big time in the new Netflix series, Master of None. Created by Ansari and Alan Yang, the show follows Dev (Ansari), a New York small-time actor, as he leisurely navigates the single scene as a first-generation Indian-American. As Americanised as apple pie but is constantly reminded of his Indian heritage by his parents (played by Ansari’s own parents), Master of None is a millennial romantic comedy with an Asian-American baggage. A wonderful episode had Dev and his first-generation Taiwanese-American friend Brian comparing their cushed lives to those experienced by their parents. American kids growing up in the Asian household have long been treated with the classic stories of their parents’ hardship in the old countries and the sacrifices they have made in order to give them a better life in America. It looks like Ansari and Yang grew up in such household. As hilarious as it is, the episode brings back the all too-familiar feeling of burden to stay good children of immigrants carry with them. The half-hour ten episodes of the first season are now binge-ready on Netflix.