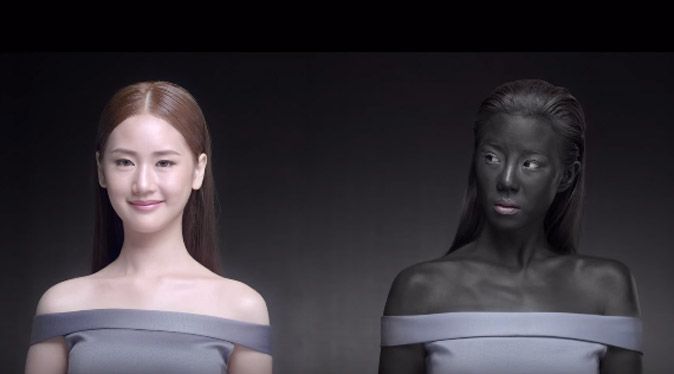 You may have seen the Thai TV commercial for a (quack?) skin whitening pill called Snowz. This ad has drawn attention from both the local and international press including CNN for being blatantly racist. In the 60-second spot, popular Thai actress Cris Horwang explained that her hard-won success –a success she chalks up to having light skin– must be maintained by taking a skin whitening pill or someone else, presumably younger and with whiter skin, will rise through the ranks to take her place. Standing on the screen to Horwang’s right is that whiter and younger competition. To demonstrate the atrocity that could befall her, Horwang’s all-over skin tone slowly turns from her natural tone to a ridiculously unnatural lamp black.

The outcry over the Snowz commercial might surprise some Thai natives whose infatuation with whiter skin color is so culturally ingrained that they don’t realize it is offensive. While most critics cry racism, the commercial is also a case of classism.

In order for me to get to where I am, the competition is high. It’s not easy to survive (in this industry) for a long time. And whenever I stop taking care of myself…..the whiteness that I have invested in will vanish. A new kid could replace me. Being white will make you a winner.

Thai culture has a long history of favoring lighter-skinned Thais. The long standing concept is that dark people are from the working class – the farmers who work in the rice field. Lighter complexions suggest education and status – people who get to escape the scorching sun and work in air-conditioned offices.

Following the bad press, the commercial has been pulled. Seoul Secret, the company behind Snowz, has since issued an apology.

Maybe it’s time for Thailand to take a cue from India. Just two years ago, the Advertising Standards Council of India issued a new set of guidelines that banned all ads that depict those with darker skin as being inferior in any way.

“Advertising should not communicate any discrimination as a result of skin color, and the expression of the model in the ads should not be negative in a way which is widely seen as unattractive, unhappy, depressed or concerned,” read the guidelines.

Let’s hope the Snowz commercial will start a discussion within the Thai community. The prejudice against darker skin in Thailand has had a long history and will not be eradicated overnight but as long as the discussion starts now, it’s a step forward.