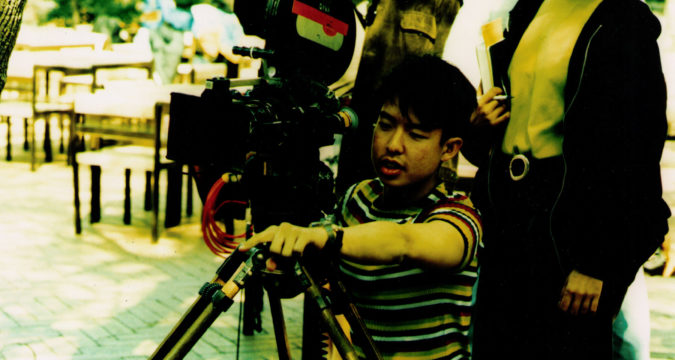 A prolific filmmaker and creator who started UCLA Film School in 1993, Quentin Lee has set off to make stories about his community, queer Asians, in the 90s when there were scarce or none LGBTQ+ and AAPI representation in popular media. Almost three decades after they started their career, producer/writer/director Lee has digitally restored their first feature film effort, Flow, which is an experimental feature compilation of his short films made at UCLA. Flow was first premiered at the Vancouver International Film Festival in 1995 and had a brief theatrical release in Los Angeles in 1999. As AAM.tv is streaming it exclusively on April 8, CHOPSO took the opportunity to interview them about their first experimental feature after 27 years. Flow will be released as a companion piece to White Frog (2013) which will have its 10 Year Anniversary Screening at Outfest Fusion this Sunday April 10.

How did you get the inspiration to make Flow, such an experimental work?

QL: When I started UCLA film school in the Fall of 1993, I’ve had the vision to make a feature so I started making short films with queer Asian characters. As I was making short films between 1993 and 1995, I came up with the idea of making a feature with a wraparound story about a fictional queer Asian filmmaker like me and his journey from experimental to narrative filmmaking. After I finished my last and longest short film “Fall 1990” in 1994, I began shooting the wraparound story and the opening episode by myself and completed Flow on 16mm ABCD roll negatives. As soon as I made the answer print and telecine, I sent a tape to the Vancouver International Film Festival and programmer PoChu AuYeung programmed it.

As mentioned a bunch of technical film terms, can you talk more about them and how Flow was made?

QL: Flow was made very experimentally. It was shot on color and B&W 16mm film. “Matricide” has footage that was transferred from home video to 16mm film. When I was doing the wrap around story I also shot a lot on video and re-shot the footage myself on an Auricon camera on 16mm… and then I transferred some more footage with another lab from video to 16mm. So even making the feature itself was a very experimental process. I remember UCLA had an Auricon camera but didn’t have a magazine for it; and I had to look all over and borrow the Auricon magazine from the film department of Cal State Northridge. I completed Flow editing on 16mm, which was a phenomenal training. I also designed the sound for Flow on a very early Protools system. The negatives were then cut; and a final answer print on 16mm was made.

What was the reaction when you first premiered it?

QL: Because of the film’s experimental nature, a lot of people were puzzled by the film when it world premiered at the Vancouver International Film Festival in 1995. My dad’s friend and wife looked very confused and dumbfounded after the screening.

You later also released it theatrically in Los Angeles, right?

QL: Yes, I did. I think it was either midnight or morning screenings at a Laemmle theater. It got positive reviews from both the Los Angeles Times and was LA Weekly‘s Pick of the Week. It didn’t do much box office business though LOL.

QL: Yes, that was also true. Some close industry friends suggested that I didn’t count Flow as my first feature as Shopping for Fangs premiered at TIFF (Toronto International Film Festival). I remember bumping into PoChu (from Vancouver International Film Festival) later over the years and she sounded offended and said, “Flow was your first feature. I programmed it.” I was too young then and tried to please too many people.

Did you also win an award at UCLA for one of the shorts?

QL: I won a Spotlight Award for “Fall 1990,” the longest short which was pretty much in the last reel of Flow. When I turned in my reel, because there were a couple minutes of footage before and after the short, a professor accused me of changing the cut after submitting to the awards. He threatened to pull my award if I didn’t cut out out those minutes. I was angry because I was forced to cut up the only answer and release print for my feature which had already been screening in the festivals. Regretfully, I did end up cutting up the reel and didn’t show up at the screening as a protest. I remember Justin Lin telling me I should have refused and turned down the award. I really should have listened to him.

Sorry to hear about that… but congrats on the 10 Year Anniversary of White Frog, your fifth feature, that you’re screening at Outfest Fusion this weekend. Can you talk more about that?

QL: Outfest is my family as I have screened Flow there as early as 1996. I’ve subsequently screened most of my features there. Both Outfest and Outfest Fusion are great platforms for LGBTQ+ filmmakers and I am indebted to Outfest for my career. That’s why I decided to release Flow on the opening day of 2022 Outfest Fusion. In fact, Flow was being preserved at Outfest Legacy Project and UCLA Film & TV Archive. Without such a program and the support of UCLA Film & TV Archive, I wouldn’t have been able to restore my 16mm feature on 2K.

What are other projects on the horizon?

QL: Oh, boy! I co-created and directed the second season of Comedy InvAsian which will stream starting May 1 on Peacock and Tubi.

I’m waiting on festivals for the feature I just finished, Last Summer of Nathan Lee. I created a comic book, the first AAPI science-fiction adventure comic book titled Mystery Brothers, whose first issue will be published in July the day before Comic-con starts. And then I’m shooting Comedy Invasion, a spin-off of Comedy InvAsian, first week of May in Canada.