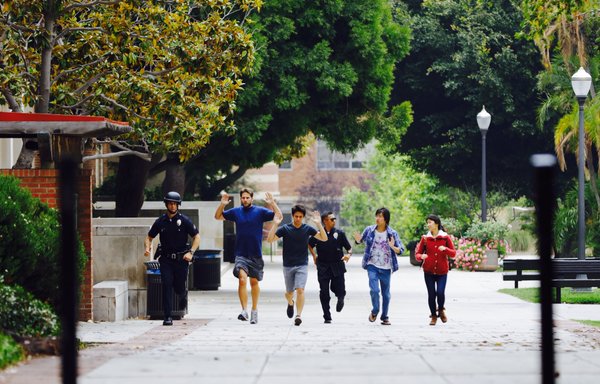 The news of the shooting at UCLA unsettled the westside neighborhood where I live. For hours, media outlets would only comment that there were two down and an active shooter. Conflicting information swirled around television and social media: UCLA’s Police Chief stated in a televised press conference that all they could report was two down, gunman still at large. I hear that students are barricaded in classrooms on campus in or near the building where bodies were found. Next I see a tweet that eight gunmen are on the loose. A SWAT team is on the scene sweeping the area. A neighbor calls who says she heard it’s four gunmen that may have escaped into the hills. Terrorists? That’s why the F.B.I. are there. Are the F.B.I. there? Now on TV, the speculation is that, of the two down previously reported, maybe one was the victim and the other the gunman.

It wasn’t until well into the afternoon that it was finally confirmed that the last was true, a case of murder-suicide, where a former student returned to campus to murder his professor. The victim was identified as William S. Klug, an Associate Professor in the Mechanical and Aerospace Engineering Department at UCLA. On internet news sites, it’s reported that Klug, a father of two, loved surfing and the Dodgers, and who coached his 10-year-old son’s Little League team.

By nightfall, the identity of the shooter who earlier brought the Los Angeles westside to a halt was still a mystery.

The next morning it was finally confirmed that the man who shot Klug was a student named Mainak Sarkar, 38. Before killing Klug, Sarkar killed his wife Ashley Hasti two days earlier in Minnesota. After Klug’s murder and the discovery of Hasti’s body, authorities found a “kill list” at his home with the names of Hasti, Klug and another professor (who is fortunately safe) on the list.

So what was the relationship between Klug and Sarkar? News reports state that Sarkar was a student at UCLA between 2007 and 2013 when he earned a mechanical engineering Ph.D. Klug was one of Sarkar’s engineering professors and chaired his mechanical engineering doctoral dissertation committee three years earlier. In that 2013 dissertation, Sarkar had expressed gratitude to Klug for his help and support, “Thank you for being my mentor.”

It’s unclear when and why Sarkar began to harbor a grudge on Klug. In a March 2016 blog post, Sarkar wrote, “William Klug, UCLA professor is not the kind of person when you think of a professor. He is a very sick person. I urge every new student coming to UCLA to stay away from this guy. My name is Mainak Sarkar. I was this guy’s PhD student. We had personal differences. He cleverly stole all my code and gave it another student. He made me really sick.”

Before enrolling at UCLA, Sarkar went to Stanford University for his master’s degree in aeronautical and astronautical engineering. Before arriving in the US around 2001, Sarkar went to the Institute of Technology in Kharagpur in India for an undergraduate degree.

Questions abound at this time as to why this tragedy happened. Was this the result of a perceived pressure to succeed even after achieving an advanced degree? Or mental instability? Could this have been avoided if guns were less easily available?

While paging through news feeds to find updates on the incident, I came across another post about the Los Angeles City Council passing a measure to help identify gun dealers in L.A. County who sell the highest number of guns that are later traced to crimes. This measure will presumably help keep guns from falling into the hands of those who use them for criminal activity. The passing of the measure is coincidental to the shooting at UCLA, and related in only one, perhaps significant, aspect. If there was less access to a gun for an allegedly unhinged gunman, like Stanford graduate Sarkar, then maybe one more dad would be coaching Little League this Saturday.