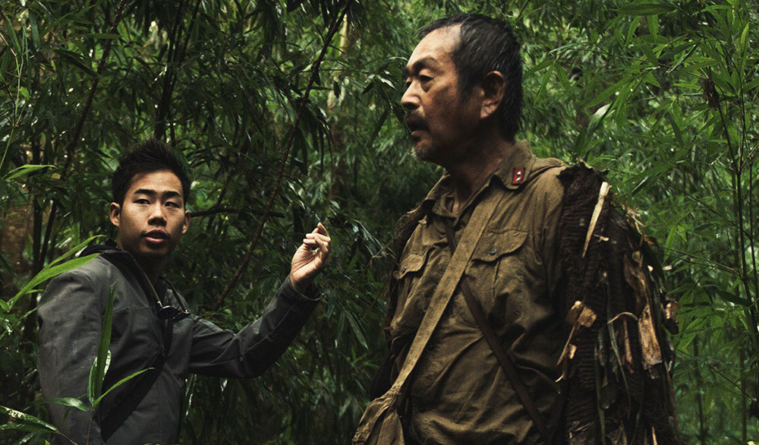 Filmmaker Brian L. Tan (aka BLT) talks about his latest short film “Holdout” which will world premiere on Dec 7 at 7 pm in Los Angeles. Get your ticket for the screening now! And will also stream on CHOPSO.

How did you come into filmmaking and what was your first industry job?

BLT: As they say, start em’ young! It’s so cliché but my love affair with filmmaking started from an early age when my English Literature teacher in high school made us do a video adaptation of any Shakespeare play of our liking. I chose Titus Andronicus, the deadliest and bloodiest of all of the barb’s works. I made a mafia-inspired adaptation (the high body count helped) of Titus and it was incredibly well received…. At least as well received as a glorified home video shot on 480p mini DV tape in 2004 could get. Up until that point, I had been a short story writer and seeing a written story brought to life and visualized in a tangible way was an incredibly powerful moment for me. From then on, there was no going back.

In college, I started UC Riverside and UCLA’s first film and photography club that emphasized the hands-on learning experience of film production that the film school didn’t offer for undergraduates. Thanks to all the productions I had shot as an independent student filmmaker, I managed to parlay my reel into an internship at Dreamworks where I worked in the artistic development and training department assisting How to Train your Dragon, which then spawned a studio career with the events department at Paramount then culminated in me working in visual effects at Digital Domain on films like Tron: Legacy, X-Men First Class, Girl with the Dragon Tattoo, and Jack the Giant Slayer.

How did “Holdout” come about? Why did you decide to shoot it in Hawaii?

BLT: Sometimes, truth is stranger than fiction and this is certainly the case. Holdout is actually based on a true story that I discovered it by pure happenstance on Wikipedia one day. Browsing through the site as I often do for fun (I’m a huge history geek), I came across an article of Hiroo Onoda on Wikipedia announcing his passing. The real life account of a Japanese lieutenant from World War II who kept on fighting a one man guerilla war for 30 years really intrigued me. Not only had he refused to surrender, but he had evaded Pilipino authorities for decades – only to be found by a Japanese student traveling through the area who managed to find and convince him to return home. After hours of deep diving into the subject, reading Onoda’s autobiography and letting my imagination run wild, I decided to make a narrative loosely based on a similar lost Japanese soldier who stumbled upon an American tourist backpacking through the jungle and the struggles the two would undergo together in a clash of language, culture, and world views.

Though the real situation unfolded in the Philippines, I did not have any production contacts there, so I briefly considered Malaysia before settling on Hawaii. What sold me on Oahu was not only its proximity to the West Coast, but also the quality of the sets and crews out there. There are four or five major features and TV shows filming on Oahu throughout the year, and being a small industry, the same crews working on these big productions would also take on independent projects like mine as well. It also helped that thanks to producers Angie Laprete and Brian Yang, we were able to secure logistical support and sponsorship from the Island Film Group as well, who produce Hawaii Five-O among many others. Without their support and the world-class quality of our Hawaiian cast and crew, we would never have been able to pull this film off.

What is important about the story of “Holdout” to you?

BLT: “Holdout” was made to be a cautionary tale. Despite this film being set in a far away land about a soldier from another era, there are striking parallels to modern life. Like our protagonist, we can sometimes become so indoctrinated with a particular point of view, identity or belief system that we fail to recognize how said beliefs can negatively affective our own lives and the lives of others. I personally believe that Onoda knew the war was over, but he refused to accept the truth because without the war he would be nothing. His life would be meaningless and his compass would lack a sense of purpose and mission. So he kept on fighting despite the fact that it was plainly obvious that World War II was long over; war was all he knew and he kept it going to perpetuate his failed sense of mission and duty.

Similarly – In this day and age we have the ability to silo ourselves from the world by interfacing exclusively with friends, internet groups (read: Tweets), sources of information and news channels that shore up our own perspective. In essence, we’re becoming our very own holdouts – Completely and totally oblivious or resistant to other points of view just because they don’t line up with our own. That is very dangerous and I wanted to make “Holdout” as a canary in the proverbial coal mine of what we could become.

It seems you wear a lot of hats. What are the latest projects you’re most passionate about?

BLT: My dream has always been to be a blockbuster director. Obviously until I reach that point, it is critical that I still keep on exercising my creativity; which is like a muscle – You either use it, or lose it. This year, I’ve had the privilege of directing a few spots for the Audi R8 LMS Cup in Nürburgring, Germany at the 24 hours of Nürburgring race, a petrolhead dream come true.

Another highlight has been getting to direct a Virtual Reality 360 commercial for Visit Las Vegas which basically entailed swimming at the Waldorf Astoria, watching a few shows, and flying around the Grand Canyon via helicopter. Rough life, I know! That the latter won an award at the International Travel Trade Show in London was just icing on the cake. Looking back, the most exciting project this year was directing a branded content short film called ‘The Delivery’ featuring Erik Valdez, Jonathan Lipnicki, and Christopher Mintz-Plasse from Superbad! I also had the honor of working with the legendary Verne Troyer, who sadly passed away days after principal photography concluded. The fact that our film was his last ever project was an ever visceral reminder of the fragility of life and how we had to live our lives to the fullest in the pursuit of our dreams.

I’ve been very fortunate that this year has been filled with a lot of paid shoots, but that’s translated into very little spare time for fun projects. As such, one of my new year resolutions is to rekindle my love of passion projects like “Holdout” and take on even more creative projects that allow me to innovative and push myself to the next level.

5) Tell us about Wrapal.com and how you came to found it?

Like any product, Wrapal was born out of a problem: Namely, I hated location scouting. As a director, it was easily one of the most time consuming, soul sucking parts of the production process. I hated having to either cold call random places on Yelp or go door-to-door trying to find the perfection film location. Being an avid traveler, I always used AirBnB and thus came up with the idea of creating an ‘AirBnB for film locations.’ Funnily enough, the press (see below) has come around to calling us that as well and Wrapal’s had that has an unofficial tagline ever since. Though my main focus is and will always be making films, I wanted to help my fellow filmmakers as well by creating an online database of more than 2,500 residential, commercial, and industrial locations that they could also contact and book locations for. We think of ourselves as a startup by filmmakers for filmmakers.

6) What is your general artistic inspiration and what inspires you?

Like most creatives, inspiration can come from anywhere. In Holdout’s case, it was a true historical story that struck a chord with me. On top of reading, watching TV and going to screenings, my other form of inspiration is travel. To me, there’s nothing more exciting than immersing oneself in a whole different language, culture, and lifestyle. You get to learn so much about a different way of life, which in turn unlocks parts of your brain that allow you to expand the way you think and approach stories from a unique, creative, different angle that you would have never otherwise considered. In addition, travel offers an almost limitless treasure trove of interesting experiences, unique characters and spectacular backdrops that lead to ideas for future projects. It doesn’t even have to be exotic: Traveling to a different part of this beautiful state or country can expand the imagination which could Kickstart a project or two.

I’ve been very lucky in that I’ve been given an opportunity to combine my passions of directing and traveling too. Ever since we won an award with Condé Nast Traveler last year for an around-the-world video called “Solesearching,” travel videos have become one of my niche specialties as a director. Folks always ask if traveling for work ever gets tiring and so far it has been nothing but a dream! I I don’t think I’ll ever get enough of it. I have already been to nearly a hundred countries, but there are still more many places yet to see, and so many more locales to spark inspiration in the future. The more I travel, the more I realize there is to see.

What would be your one advice for someone starting out to be a filmmaker?

BLT: It takes time. Like any aspiring filmmaker, I was naive in my younger days, thinking that it would only be a year or two before I found my big break: I thought I would be directing the next Star Wars, James Bond or one of the Marvel movies in no time. Naturally, I was completely wrong. Like anything in life, it takes a lot of time. Like winning the lottery, some have gotten a lucky break, but the vast majority of creatives in this town take decades to become an ‘overnight success’. To thrive in this industry, it requires not only hard work, talent, and connections – Opportunity and timing also need to line up. Being a naturally impatient person, I’ve found this lesson to be one of the hardest, most frustrating realities of Hollywood and a good lesson to pass on to the next generation.