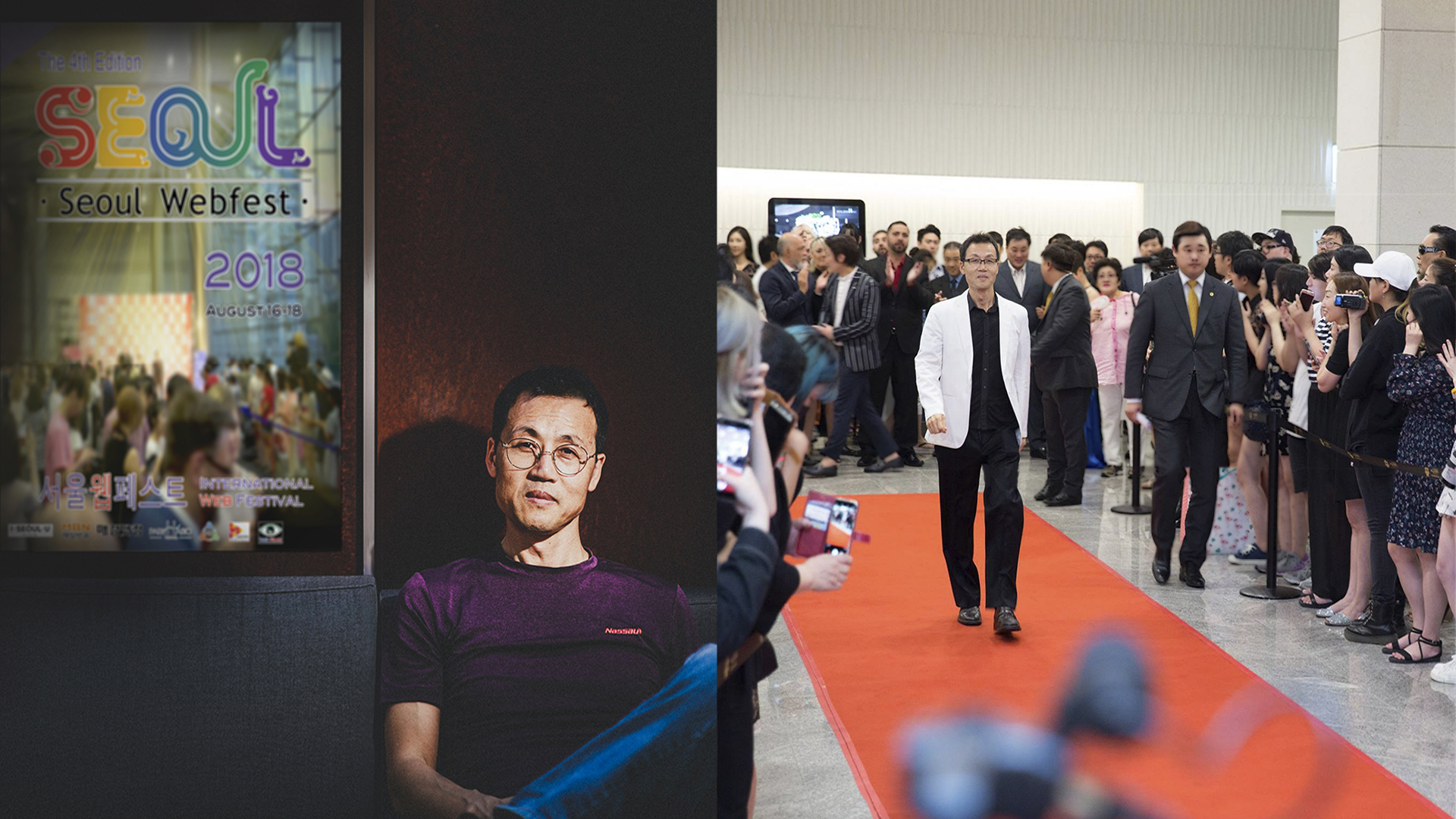 I met Young Man Kang in the 90s when he was a prolific feature filmmaker in Los Angeles. After making a dozen of features or so, Young relocated to Seoul, Korea, where he started the Seoul Web Fest and focused on creating web series. CHOPSO is streaming Young Man Kang’s Kimchi Warrior and A Day Dream.

We know each other as an independent filmmaker in Los Angeles. Can you talk about your transition from making indie features in L.A. to Seoul starting up Seoul Webfeet and your recent work in web series? Why did you make the move?

YMK: I was born and raised in South Korea. After college I moved to the States. My filmmaking background is unique, influenced by both countries and cultures. I’ve been in NYC for 2 years and then in Los Angels since 1997 working as a filmmaker. Since then I made 6 feature films and in 2014 I moved to Seoul I made 5 web series. In 2015 I found Seoul Webfest(K Webfest) for the first time and only one webfest in Asia. I travel between Seoul and Los Angeles working on co-productions. Now I extend travel in Europe, South America, Australia, Russia and Africa.

I am fascinated with the new technologies for filmmaking. In 2000, when I made my first feature “Cupid’s Mistake,” it was considered in Hollywood as part of the first generation of digital filmmaking that departed from traditional 35mm filmmaking. It screened at the theater with a video projector, not a film projector. At that time nobody imagined that 35mm film would disappear so soon. Then in 2009, 3D filmmaking came to Hollywood. At the same time in South Korea, 4D film started to screen alongside the 3D film “Avatar.” I had a chance to make the first 4D short film project “Brave New World: 4D Filmmaking” for the 4D movie theater in Seoul. I’ve always experimented with new technology and new formats, and I wanted to do a web series. So in 2011 I made “Kimchi Warrior.”  The Kimchi Warrior was a big hit and won 3 awards at LAWEBFEST in 2014. In LAWEBFEST I discovered and studied all about the web series.

I like feeling like a filmmaking pioneer, and I want to introduce aspiring filmmakers in Korea to the web series format. The best way to do that is to set up a web fest in Korea. That’s my motivation. Also web series are perfect for smartphones. In South Korea, Samsung and LG are strong in hardware, but they need content for their devices. So I found Seoul Webfest in 2015.

Since web series first emerged in the 1990s, the short format has offered aspiring actors and filmmakers a chance to break into the industry, creating footage that’s available for anyone with an Internet connection.It’s very hard to get into the conventional major film industry, especially new or upcoming young actors and filmmakers(Creators), because they’re working under big pressure with a big budget system. There’s no freedom. It’s top-down system. But web series are breaking down the top-down conventional system with a bottom-up approach.

Can you talk about the changing landscape of independent cinema in the late 90s, where we started, to now? How has the internet and globalization affected the industry?

YMK: Web series first emerged in the 1990s, most of the web series, some creators called web episode(Webisode), appeared in Youtube and Vimeo.

The picture and sound quality are poor, so conventional industry people looked down the web series in the beginning.

In 2010 web series was getting slowly recognition through LAWEBFEST for the first time web series international festival. Now we have about 60 webfests over the world.

It reminds me so much of rap music in the early to mid 80s and how that music form went from radical and misunderstood, to the dominant form of music a decade later, and then finally evolved to the established brand it is today. Rap wasn’t just about the music, it was a movement and in some cases with some people, it is a lifestyle with language, clothing and jewelry all reflective of that music movement. I don’t know if web series are going to be as influential, but I do know they are inspiring creative people to take control and tell their stories.

Storytellers around the world have a longing, a burning passion to be heard. It’s this desire to get their visions out any way they can, as best they can, coupled with the access to whatever tools of production they can get their hands on that is fueling the movement. Access to distribution is especially important, led by worldwide platforms like Vimeo and YouTube. Today, a nobody can become a somebody fast, but that hasn’t always been the case. Stories have historically been sanctioned from the top down, commissioned by the wealthy. Even the incomparable William Shakespeare was on someone else’s payroll when he was writing all of those timeless plays. Today’s technology has made the means of production more accessible to the little guy—the girl and boy and mid-lifer and senior next door are driving the storytelling. This “bottom-up” storytelling is subtle but revolutionary, and it’s taken the entertainment industry by surprise.

How did Kimchi Warrior come about? I believe it was your first animated piece.

YMK: As a filmmaker, I have made it a priority to have experience in both live-action and CG animation, as even live-action films need CG effects.  So one has to understand both CG and animation to direct a successful movie.

My first experience with animation was during my college years in Seoul, Korea.  I concentrated on the meticulous art of clay animation.  My graduation project was created using various clay materials and was shot with a 16mm Bolex Camera. The Bolex camera has the ability to shoot in stop-motion frames.

There were no CG effects around at the time.

My second animation experience was in 2005, when I directed a 6-minute trailer using 3D animation in Chennai, India.  I stayed in Chennai for about 6 months and had an amazing experience working in a completely different culture.

I had the opportunity to work with close-to 60 Indian animators who helped me better understand the new culture, as well as, have a stronger grasp on CG technology.  Most specifically, I was able to learn the painstaking process of creating digital creatures.

Preproduction and ADR (Audio Dialogue Recording) took place in Hollywood, California.  Soon after, all of the pre-production materials were brought to India.

There, the whole creation of the film’s cinema graphics occurred.  Under my direction, the India team completed the film that was then transferred into 35-mm film.

Overall, this experience was very valuable for my future film endeavors that also required CG animation.  Moreover, it allowed me to better understand the whole process as a filmmaker.

Kimchi is one of the world’s top 5 healthiest foods.  It is believed it even prevented the outbreak of SARS in South Korea. Kimchi’s probiotics protect the body against even the worst viruses and bacteria.

So when I was developing a new character for my animation, I wanted to promote Kimchi and Tae Kwon Do into the world of entertainment.  This was the birth of the Kimchi Warrior superhero.

Based on the premise of Popeye, Kimchi Warrior obtains supernatural powers by eating Kimchi.  He strives to defend our health from the world’s most notorious diseases like Swine Flu, Mad Cow Disease, Malaria, SARS etc.

Kimchi Warrior has received international recognition and is currently live on YouTube and CHOPSO.

With only a limited number of animators in both Los Angeles and India, the team was still able to produce 15 episodes within a year.  The animation uses 2D animation with Flash, Photoshop, and After Effects. Only one character, the giant robot Onggi Bot, is in 3D.  He was created by the very talented Christopher Nadolski, an animator who received an Academy Award for his visual effects in The Life of Pi.

We cast all voice-over actors in Hollywood.  One noted voice-actor was Tim Colceri, the door gunner in Standley Kubrick’s Full Metal Jacket.

The biggest difficulties of production were the extremely low budget and short time constraint.  Still, with only $100,000 USD and a year of production, we made 15 episodes. Now re-edit to 12 episodes.

How did A Day Dream come about? Was it your first work in Korean language as you made mostly English language films in Los Angeles?

Tell us about Seoul Webfest. How did you start it? Does running a festival take away your time as a filmmaker?

YMK: In 2012 I had a screening of my web series “Kimchi Warrior” at the Korean Cultural Center in Los Angeles. Michael [Michael Ajakwe Jr., Founder/Executive Director LAWEBFEST] attended the screening, and we met briefly. He told me about LAWEBFEST and suggested I submit my show. I did, and I was accepted. My involvement in the festival was a great experience. I learned so much about web series and was inspired to set up Seoul Webfest(KWEB FEST) in Korea in 2015.

Seoul Webfest has been held for 4 years and through 4 year’s experiences, the most important goal is globalization. This will be done through creating contents, through the webfests international circuit to share creator’s contents, by building market sales and buying and becoming more business related.

A side program is the fam tour  that we’ve been doing  for 3 years. It brings the international guests to areas in Korea to promote the local tourist spots. It has been very successful.

We’re developing more not only a sightseeing tour, but also industry tours that we’re planning in the near future.

Also the market booth industry has been added. It was amazing at the Bilbao Series Land and now we’re touring the next one at Die Seriale. Seoul Webfest 2018 tried  several business market booths at the event hall and we’re trying to expand to other business as well.

I noticed among the international creators that they have secondary businesses who want to expand into the Korean market. On the other hand, Korean business men also would like to expand their market globally. So I think we will provide them with matching making.

Running a webfest hasn’t been taken away my time as a filmmaker. As you know filmmaking the hardest part is waiting for green light funding. So while waiting for funding, I run a webfest.

Through webfest I have been traveling my other partner webfests and have been meeting a lot of creators, filmmakers and industry business related people, so have been building a lot of connections.

Through the meetings we’re setting up 2 international co-productions and currently developing scripts for tourism-branded web series in France and Germany.

In your opinion, how has your identity as a filmmaker evolved? As back in the days, all we wanted to do were features.

YMK: I don’t care what kind of media format filmmaking as a feature or web series. As long as money comes, I follow the flow.

What are you doing next creatively that we can look forward to?

YMK: We’re setting up 2 international co-productions and currently developing scripts for tourism-branded web series.
One is Germany-Korea, we will be shooting one part in Seoul in April and the rest in June in Germany.The other is France-Korea, we are developing a script.