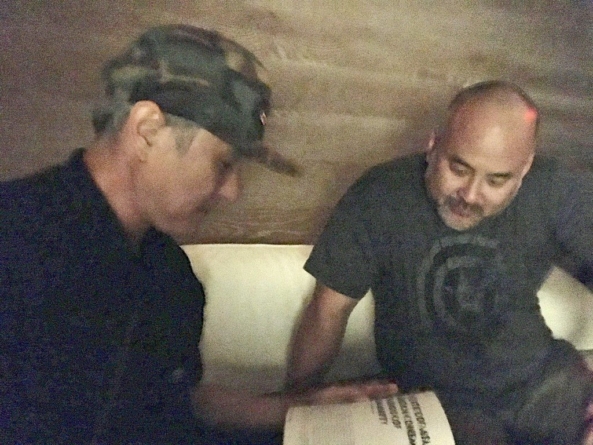 The ultimate indie Asian American filmmaker Michael Aki has restored his first feature, Sunsets, co-wrote, co-directed and photographed by his cousin Eric Nakamura, the founder of Giant Robot. It was a precious collaborative debut feature that world premiered in 1997 as part of the Asian American New Wave Class of 97. Twenty two years later, Aki has re-scanned and restored his feature Sunsets on HD which will be streaming on CHOPSO.

When did you make Sunsets and how did it come about?

MA: Sunsets was shot during the summer of 1996 after four or five years of correspondence (concept to script) between Eric and I.  It was a long process due to where we were located during those years, Eric being in Los Angeles and San Francisco, and myself in Central Cal.

EN: I think Sunsets was made during the summer of 1996. Perhaps part of making Sunsets was my experience of assisting filmmaker, Gregg Araki shoot a feature film in 1991. Being a key part of his low-budget production illustrated that making a film was possible. From there it was sharing some of that knowledge with Mike and little by little, we both got comfortable by making our own Super 8 short films as we developed our plans.

What was it like directing together? And i know Eric even shot the movie himself.

MA: Directing together was easy, because Eric and I were both prepared and had discussed so much beforehand.  When you shoot guerrilla style and are trying to be cost efficient – you cannot be unprepared.  Also, we rehearsed a lot.  And when I say a lot, I mean a lot lot.  Since we had a centralized location (my parents house) we were always there hanging out and running lines.  When we went to the store we ran lines, when we bbq’d we ran lines, when we played video games we ran lines.  And most of the time, when we ran lines, they weren’t announced, one of us would just start it off out of nowhere… We also had formal rehearsals in the backyard to kind of mimic how the scene was gonna be shot, once we got to the actual location.  In some ways, most of the direction happens in the backyard, and when we actually shot film, it was just about executing.  Executing within our 2:1 ratio…ok maybe 3:1..

As for Eric shooting the movie.  That was given.  A no brainer. He’s the one that got me into photography and filmmaking with Super8 film. He’s my mentor.  So in that regard we had both visualized the movie the same way, shooting in the 4:3/Fullscreen.  He did a great job lugging and managing that camera. Not to mention changing the film in the black bag on location – basically blindfolded

EN: With the limitation of just 1 or 2 takes and no way to review a scene except to listen to the sound recording, you don’t have much flexibility. Mike acted in it, so for him it was perhaps even harder to “see” the takes. I think the actual scene direction from my point of view, was also governed by the rest of the limitations of running a low budget production. The more you’re worrying about the car starting up, the less you think about directing. Directing seems like the least memorable part in the process. I am glad we chose to rehearse scenes over and over until it all sounded close to being a natural conversation.

Framing scenes came from my photographic studies. I was often praised for decent compositions, so perhaps that carried through. It didn’t seem difficult at the time perhaps due to my blind and youthful confidence. I recall even using color filters for select scenes although it was all black and white.

When was the first premiere of Sunsets and what was the initial reaction? Were you both happy with it?

MA: The first premiere for Sunsets was at NAATA (SF) in 1997.  I was happy with it, but was so overwhelmed by the whole experience.  In that time – most screenings sold out.  So the line was long and the theater was packed.  I cried like a baby after the Q&A on the street in front of the theater.

EN: The premiere took place at the NAATA (now CAAM) film festival in 1997. The reaction was powerful from what I remember, and I was happy to see a line-up for our sold out show. SF felt like the gold standard of Asian American film festivals at the time, and you were treated well. I recall that the audience liked Sunsets as if it truly mattered, but the reality is that it was just a tiny mark, if any, in the world of cinema. Given the right circumstances, perhaps it could have left a larger mark. It’s certainly better than a lot out there.

Now, 22 years after its initial release what are you expectations of releasing this HD edition? Do you still find Sunsets relevant?

MA: I’m just glad that we finally got a “clear” transfer finally. Now I can get some rest…then wake up and start putting together the original cut in HD.  😉    I think films are always relevant, or you can always find some kind of relevancy in films.  As for Sunsets, yes, it’s still relevant, if looking at it in regards to representation.  The playing field is still uneven and most likely, will always be.

EN: Yes. It’s a story that metaphorically reflects the experiences of many folks everywhere.

My only expectation is that it will finally look sharp and will exemplify the potential of 16mm film. I’d admit that the original transfers to video were quite poor, so seeing it on DVD was always disappointing and a bit embarrassing. I’m unsure if I have any other expectations since I try not to, except I’m hoping people will appreciate the story. The current cut of Sunsets is remarkably different thanks to Mike’s fastidious editing and updated technology.

Looking back after all these years, if you had to make Sunsets again would you be making the same movie?

MA: Nowadays you can make movies for a lot cheaper, so Sunsets would be totally different.  We would probably have the 7-8 lead characters that I initially wanted and not be so limited in regards to what we could do or how ambitious we could be.  However, that’s doesn’t take anything away from how it was done.

Eric and I, are cinephiles, so knowing we were going to make it guerrilla style we followed the influences of those such as Jarmusch, Cassavettes and them Frenchies to name a few..
I guess I should include Kevin Smith by default – I guess… And for sure Wang’s Chan is missing. The list could go on….

EN: It’s a difficult question since my cinematic efforts ceased soon after the release of Sunsets. I’d say if I had to make Sunsets again, I’d like to think I can make it better, but more than likely my technique would be roughly the same although the story would mature. I think Mike would do this much better.

What was your most memorable moment of making Sunsets

MA: I don’t think I can pinpoint the most memorable moment, as the whole experience was special.  And that is always the case when you make a film.  It’s always special.  Definitely, though, spending the whole summer at my parent’s house with everyone and making a movie might have been the highlight.  We were not only making a movie, but we ate good, drank good, and just had a good time.

EN: There are numerous and ironically none are production related. Part of the project was the fact that it was a three month summer camp type situation. We were all at Mike’s parents house in Watsonville trying to make a film. The summer was filled with going to the drive-in theater, eating good food, and having a good time. I’m sure there was some disbelief and skepticism among our parents and that’s part of the project as well. After making Sunsets, the best part was touring with the film and conversing with filmmakers and folks along the way.