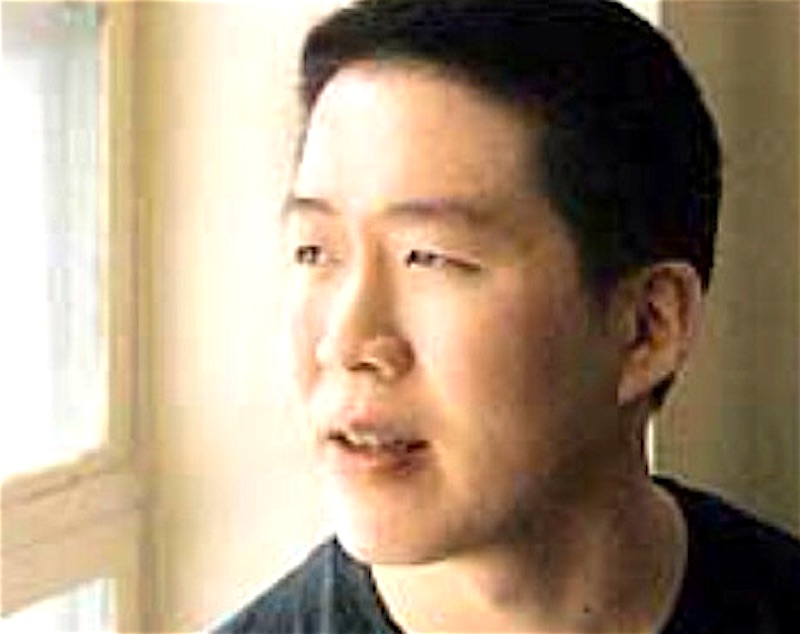 In the wake of the largest mass shooting in America that already overshadowed the UCLA campus shooting less than two weeks ago, I reached out to my friend Wayne Lo, an ex-campus shooter turned artist, who’s currently serving time in Norfolk, Massachusetts.

I first met Wayne through Hyena Gallery that represented his art. As an artist, Wayne goes by the pseudonym Skid Lo. In 2014, Wayne made a piece of art and dedicated it to Jason Tobin who played the serial killer in the film I produced originally called Chink but was later re-titled by the distributor as #1 Serial Killer.

A Taiwanese American immigrant, Wayne attended Simon’s Rock College of Bard and perpetrated a shooting on December 14, 1992 that killed one student and a professor, and wounded four people, before he surrendered to the police. He was also known as a racist and homophobe during his time in college, but his perspective has turned around over the years. He was also suffering from paranoid schizophrenia at the time he committed his crime.

I find Wayne’s perspective to be important and informative as he is one of the few surviving shooters with a clear mind. Most of the shooters were either taken out by the police or committed suicide. Especially after having so much time to reflect on his actions and what drove him to do what he did, Wayne Lo’s perspective is illuminating toward how we could prevent future mass shootings.

Below is the brief interview I got from Wayne as he called me from incarceration.

A: What are your thoughts about the Florida mass shooting and the UCLA campus shooting?

WL: My thoughts are with the victims and family. I can’t imagine what they are going through. Even though I know people who have gone through this, it’s really tough. But that’s what happening in the world.

A: Do you think having stricter gun control will help?

WL: I can’t really talk about anybody else other than my own situation. It can become a very political subject and I don’t want to throw politics into it. Would having more stringent gun control deter someone for a while or possibly make it worse or better? I can’t really say.

Speaking personally, having gun control would have made it different for me. If I hadn’t been able to get a gun so easily, I would not have done what I did. Gun lends more courage to people, if you know what I mean…

A: I seem to recall that it took you a week to get a gun or something?

WL: No, I went to the gun shop the first time and was able to purchase a gun. The process was very easy.

As for the Florida case, I wonder how much time it took for the shooter to purchase his gun. That could be a determining factor. I always thought there would be a waiting period to buy a handgun.

In my case, if I had to wait for a week I would have gone home. In an agitated state, you want to do something imminent. But what if that person calms down?

A: If you hadn’t gotten a gun, would you have taken a knife or drive a car to hurt people?

WL: No, I wouldn’t have taken anything other than a gun to hurt people. I turned 18 a month prior to the incident. I wasn’t able to rent an automobile. But it was legal for me to purchase a rifle.

A: Since you have been in that state of mind, can you talk about any similarity or connection between you and others who killed?

The first line is you are in that state of mind and you’ve gotten pushed over the edge… but if you don’t have a weapon you really can’t harm anybody.

The second line is you are able to go out and get a weapon and are already pushed past the first line. It’s at that point shit happens.

People have tried to profile shooters based on their age, educational background and ethnicity… but the real connection is the use of a gun. Whether it’s because of terrorism or personal issues, we ended up in the same place because of the weapon. Beyond the weapon, it’s really hard to find similarity.

A: Thanks, Wayne. How’re things going otherwise? Any new art?

WL: Lately, it’s been pretty slow. Just doing time, you know. [laughs…] I lost some inspiration the past winter because I was really holed up inside.

A: How do you find inspiration?

I find inspiration through other people. I’d see something that others did and I thought why I didn’t think of that. And I’m going to riff off that. I like to put my own riff on something.

Check out Wayne’s art at Hyena Gallery. Wayne donates all the proceeds of his art sales to his victim’s father Gregory Gibson and the Galen Gibson fund.

13 thoughts on “Exclusive: Ex-Shooter Wayne Lo on Orlando and UCLA”