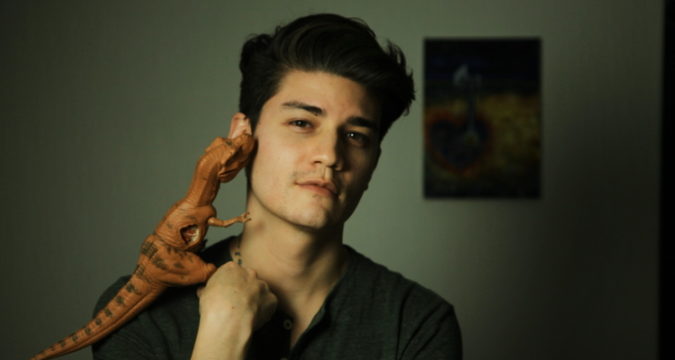 Nick Neon is a half Korean American and half Spanish American filmmaker who identifies as Asian American. As a millennial filmmaker with a passion of horror, Nick has also directed and acted in two short films dubbing the “Jimmy Park” series. To celebrate Pride month, “Ultra Bleu” and “Zero One” are both streaming FREE on AAM.tv. CHOPSO takes the opportunity to interview this young upstart.

Can you talk a little bit about your racial background of being half Asian American? How does your cultural identity affect and inspire you as an artist?

NN: I actually stopped identifying with the term “half Asian” because it’s always felt limiting to my experience. I’m Asian American, that is how I have moved through this world and it’s taken me a long time to be proud of it. Growing up and presenting as ethnically ambiguous was a very lonely experience. There was a lot of confusion and questions around who and what I was from other people, but also from within myself. So that ultimately became my biggest influence as an artist – exploring disconnection and loneliness. Once I moved to Korea, things really changed my perspective on identity. The more I explored and embraced my Korean roots through my 20s, the more solid I felt as a human. I never really felt very American living in America, but I also learned that I wasn’t really Korean either. I had to learn to claim my own identity in place of what others wanted to label me.

You’re also both an actor and director / filmmaker. Is there one side you gravitate more toward?

NN: Right now, I’m more focused on acting. I spent the majority of my life wanting to pursue to it but not really believing there would be space for openly queer and Asian faces on the screen. Things are certainly changing so it feels good to pursue this passion again as the industry grows more inclusive and diverse.

Also, after Zero One, I definitely experienced filmmaker burnout from the hustle of wearing so many different hats. I was editing and coloring the film on top of writing and directing. Going the independent route requires so much stamina because you’re also producing, throwing your own money in the pot, raising funds on Kickstarter, being your own little social media hype machine while also probably holding down a day job.
After ten years of that type of hustle, I’m ready to do just one thing for a while.

I know it is very challenging to direct yourself and act in your own film. What’s your process like?

NN: It’s definitely a challenge but I love it. In order to focus on my performance on set, I do spend a lot of time with my producer and AD communicating exactly what I need from each scene on a technical and performance level during pre-production. I also run rehearsals with actors before we get on set to handle any big adjustments. This all ensures that by the time we’re on set, I can simply spend most of my time being an actor. Performance notes with the cast are usually minimal because we’ve already handled it in rehearsals and I like to leave room for improvisation.

I also have two to three people on set who I secretly entrust with giving me a yay or nay for my own performance because it’s impossible to assess it alone. So we’ll shoot my coverage and after a take, I’ll look over to them for their thumbs up or down and then decide whether I need to go again or move on. I would say trust and flexibility are important parts of my process.

How and why did you begin filmmaking?

NN: My journey as a filmmaker, and then actor, didn’t really begin until after I moved to Seoul. But so many of my earliest childhood memories are film memories that feel like first hand experiences. I’ve got these false memories of having visited and survived Jurassic Park, wandering the empty halls of the Nostromo on my way to LV 426, or spending summer days with Matilda Wormwood & Miss Honey.

But I didn’t think about film as a tangible career path until after I saw Monster with Charlize Theron during my senior year of high school. It was the first time I had seen a queer character on screen portrayed with compassion, despite the character’s strong flaws. It occurred to me that I wanted to tell stories like the ones I had been experiencing all my life. So I applied to film school.

I believe “Ultra Bleu” and “Zero One” are both queer Asian films. Can you talk about the inspiration for both?

NN: Ultra Bleu was born from this really difficult break up that intersected with a lot of growing pains in my late 20s. In my healing, I discovered how lost I was as a young adult and how I had been using the relationship (and guys in general) as a way to distract myself from facing my own shortcomings. I decided to write a film that was sort of a love letter to my 20something + lost days. I created the character of Jimmy Park as a way to explore my pain and the questions I had about life at the time.

After the success of Ultra Bleu, I found myself suffering from writer’s block. I was trying to develop Ultra Bleu into a feature but after a year of writing, it just didn’t coalesce and I suddenly felt like a failure again. But just like my break up, I felt like I could use Jimmy Park to explore my own relationship with failure and feeling like I had already peaked… that it was too late to do anything special with my life.

If Ultra Bleu was a love letter to being lost in my 20s, Zero One was a reminder to stay the course, even if it means starting all over again because truly, nothing good gets away.

As we talked before, you have a passion for horror film. How does that figure into your filmmaking… and do you see it separate from or fused into the more queer content films that you’re making?

NN: Yes – horror fan for fucking life! I had this period in my 20s where I got to explore genre filmmaking and music videos… and then another period to explore more dramatic storytelling with queer/Asian influences as well as finally becoming an actor. So moving forward, I think my films will ultimately be a culmination of all these disparate elements.
Expect visceral, tone-poem genre films but make it queer and colorful like a K-Pop music video from the year 2042.

From your IMDB, you directed your first film as a horror feature titled, “Fear Eats the Seoul.” Can you talk about that film and where can people see it?

NN: It’s about these English teachers surviving a demon epidemic in South Korea but, again, it was really me exploring my own issues around the fear that I might always be an ESL teacher in Korea instead of pursue my dreams.

Fear Eats the Seoul was like getting a master’s degree in filmmaking. I had just finished reading Robert Rodriguez’s Rebel Without A Crew and felt so inspired to make a feature film. And cosmically, it was right when DSLRs had made the leap to shooting HD video so I bought a Canon Rebel T2i and a really fancy Zoom lens and shot the film for $4,500 over 6 months with all these friends I had made along the way in Seoul. It took me two years to finish it and although I was able to tour with it in the states in 2012, we couldn’t find distribution. Horror people thought it was too much of a drama and indie folks thought it was too campy and genre leaning. Being a micro budget feature didn’t help so I basically shelved my first feature.

It wasn’t until right before COVID-19 that I finally revisited the film and objectively enjoyed it. It’s a fucking feature film that took me two years to make and I never gave it a chance to go have a life. I have since been working on a Director’s Cut which I’m hoping will be ready in time for it’s 10th anniversary this September.

NN: COVID-19 forced me to take a step back from my creative endeavors and focus on my mental health, I also made the move from NY to LA last August. So currently, I am still focused on that journey as well as auditioning. In this strange time, I’ve really had to consider what brings me joy, especially when the industry was suddenly put on pause. Taking that step back allowed me to reconnect with the “why” behind my desire to make films in the first place. It has always been genre films.

So I’m pivoting away from Jimmy Park and my dramatic shorts to begin writing my next horror feature, MONTANA, and it feels really good to be returning to my roots.

Stream “Ultra Bleu” and “Zero One” on AAM.tv FREE now!