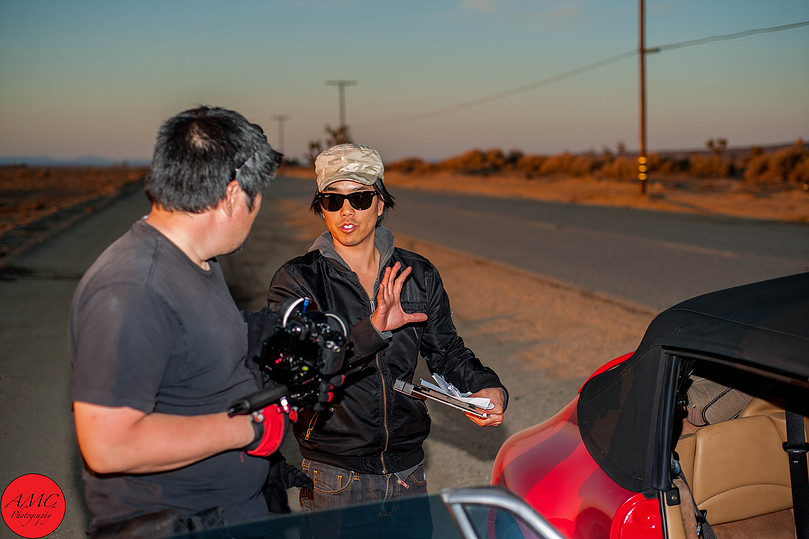 Actor / Director Alex Chu’s romantic comedy feature Yes, And… and his short film “Fortune Cookie Magic Tricks” are currently streaming on CHOPSO. We interviewed Alex about his works and upcoming feature For Izzy.

C: Why did you decide to become a director and what have you the inspiration to do a gay zombie musical “Fortune Cookie Magic Tricks?”

AC: I was an actor for some time who would once in a while help write short films here and there over the years, but I never thought of being a director at first. I had directed a corporate video series prior to “Fortune Cookie Magic Tricks” (FCMT), but being a director wasn’t something on my radar initially.

I was an actor in a short film with Derek Lui as my scene partner years before that, and we wanted to work together again. And so that was the initial motivation for working on a short film that would turn out to be FCMT. From there, I wanted to do a mashup of different elements, to see if it would all make sense somehow, as I had written scripts like that in the past (I like mashups). So it really came from a place of experimentation – to see if I can mashup different elements while saying something about accepting people for who they are. With that said, experimentation also means taking the time to work on the script.

C: How was the reception to “Fortune Cookie Magic Tricks?”

AC: I really had no expectations with the film. It was an experiment, and I was a beginner director just getting his feet wet. So when it got accepted to a bunch of festivals, and from there, other festivals started reaching out to ask for our film directly, I was surprised. But the best feeling though is sitting in an audience, and experiencing their reactions and enjoyment of the film – and seeing how different audiences laugh, gasp, snicker or clap in delight in the same moments of the film. When you’re coming at it from a place of experimentation and audiences seem to respond to it (the experiment worked), it’s not only gratifying, but also helped give me the confidence to continue taking risks going forward.

AC: Like FCMT, I tend to take on film projects from a very practical place – based on the actors I want to work with, locations available to me, props that I have access to, and so forth. And then building the story around that, rather than the other way around. Basically I had other scripts I was writing in parallel, but this was the one that I could shoot on a shoestring budget.

Since I knew that my first feature would have to be on a shoestring budget before I even had a story idea, I started from that reality. And then creatively it helps to figure out what kind of film works best for that. From there, the autobiographical elements helped since from a practical standpoint, it would draw upon what I already have – my own place, props, other locations available to me I knew that connected to the characters I was writing about, and so forth.

C: Was it a daunting experience to write and direct your first feature? How was it?

AC: It would’ve been far more daunting without a great team of cast and crew. I’ve had both good and bad experiences with past films (as a writer, or director, or actor), and while a good or even great film can come out of a bad team experience, it’s not what anyone would prefer if they had the choice! On Yes, And… I had a group of people who trusted one another, were willing to give feedback and help one another out, and most importantly – anticipate problems and nip them in the bud before they ever got worse.

Since the writer and director are the same person, that was one relationship that didn’t have to be managed, which can sometimes be a source of great pain on other films. While a feature is certainly a different beast compared to a short (marathon vs sprint), I think it really helped to have directed a few shorts before stepping into a feature, at least for me. Had the feature film been the first thing I ever directed, that would’ve been daunting and maybe even overwhelming because of all the moving parts to keep track of. C: What should we expect you next? Tell us about your upcoming feature For Izzy.

AC: For Izzy is a drama that uses mixed media (cinema cameras, consumer cameras, iPhones, animation and “in character” documentary style interviews) to tell a female-driven story about autism, addiction, and aging.

Currently we’ve just finished up post-production, and in the beginning stages of planning for festivals and distribution. It features Emmy nominee Michelle Ang (Fear of the Walking Dead), and actors from Yes, And… Jennifer Soo, Elizabeth Sung and Jim Lau.

C: What would be one advice that you give you a first-time filmmaker?

AC: Work with what you have. That big budget dream script you’re writing probably won’t be the first thing you make, and holding out for that can only take away from actually getting experience making films. There’s a cottage industry around helping people pitch and develop their films, but perhaps at the expense of being able to deliver. There’s no substitute for actually doing.

Working with what you have means working backwards in a way – what locations do you have that is free or cheap? Actors you know? Props (cars, musical instruments, weapons, etc) that you have easy access to or own yourself?

If you have only $10, then make a $10 movie – with your iPhone. Write, cast, shoot, and edit it. Whether that $10 movie is your calling card or not, it gets the wheels moving – the train leaves the station to your next film project #2, then to #3 and so on. From that $10 movie, you’re now a filmmaker. You now have actual experience making a film, which is $10 better spent than the $300 going to a seminar where their interest is to give you hope that your first film will be picked up by a major agent or studio (because if they told you to make a $10 movie, no one would spend $300 on their seminar!).