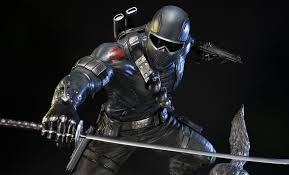 Growing up there just weren’t a lot of Asians—let alone Asian Americans—on television or in the movies. And when there were, they were very rarely people I actually looked up to. However, when it came to my day-to-day playing, I was a G.I. Joe junkie. I watched the G.I. Joe cartoon religiously and spent hours upon hours playing with my action figures. I made up scenarios where the good guys always won. My two favorite characters were Snake Eyes (right) and Storm Shadow (left). Snake Eyes was this bad ass guy in a black/dark blue uniform with a mask over his face. He had a big dog—a husky or a wolf—as a companion and never said a word. He knew martial arts and was the good guy’s ninja. Storm Shadow wore white and was the bad guy’s ninja. I don’t know this for a fact, but my memory seems to recall the two of them being mortal enemies—but take that with a grain of salt. I could have just made that up. In my play though, they were friends and both were always on the side of good.

I knew Storm Shadow was Asian. His backstory was that he was from Japan. And from what I could see of his face—since half of it was covered by a mask—was that he had “Asian eyes.” But Snake Eyes was totally different. Snake Eyes’ entire face was covered with a mask. So in my head, I always considered him Asian too.

Why am I telling you all this? Because I’ve come to believe that maybe Snake Eyes wasn’t Asian after all. What happened? My son got a G.I. Joe snowmobile playset for his birthday and it came with a Snake Eyes action figure. I was super excited—since he was my favorite character from when I was his age. But unlike when I was a kid, his mask came off. To my horror, his eyes didn’t look Asian to me.

Here’s a picture I took with my phone: I needed to get to the bottom of this. Luckily, there is Google. First, let’s look at Snake Eyes’ background:

Snake Eyes is not only a master of ninjitsu, mystical arts, and espionage, but he’s also a master combatant and artillery specialist. Fellow GI Joe Scarlett has labeled him “3-Bravo-0,” Baddest Butt-Kicker Bar None. He’s an expert in all NATO and Warsaw Pact arms. He’s also a black belt in twelve various martial art forms, which include: Karate, Kung-Fu, Ninjitsu, Tae Kwan Do, and more. Snake Eyes is highly skilled in edged weapons, and he’s particularly a master swordsman, never leaving for a mission without his Mikimoto Japanese sword. He’s an expert in firearms and explosives, and he makes it a point not to be fully dependent on one particular weapon.

Notice there was nothing about his race. As far as anyone is concerned, he could still be Asian. When I put in the search term: “Is Snake Eyes Asian?” I quickly found out that I wasn’t the only person asking this question.

What race is Snake eyes anyway, asian or caucasion?

To my delight, someone answered that they thought he was Asian:

i think he’s Asian ? maybe not but i think so

I should put this question into context: It was in response to the fact that in one of the recent G.I. Joe movies, Snake eyes was being played by Ray Park, who as the name implies is Asian! Wait… What? This doesn’t mean anything. Everyone knows Hollywood whitewashes everything. I needed to keep looking.

On another discussion board, during a very serious discussion about whether Blade would have beaten Snake Eyes in a fight, the idea that Snake Eyes was Asian came out. One of the commentators made this very salient point:

Not a good sign. But as I looked deeper, I found this:

His real name, origin, age, background, and even his service number are listed under “classified,”

So, if Snake Eyes’ background was classified, he could have been Asian? I really should have stopped here. But then I found this:

In his youth, Snake Eyes, along with Storm Shadow, was trained by the Arashikage Clan. A homeless Caucasian child, entered the clan’s home seeking food, only to be caught by a young Storm Shadow who intended to “punish” the stranger for stealing.

Noooooooooooooooooooooooooo! This can’t be. But I found this same backstory for Snake Eyes across many sites. It seems pretty clear that he isn’t Asian, but instead a Caucasian ninja trained by a Japanese ninja. Even though I found this out, I told my son that Snake Eyes is Asian and then proceeded to superglue his mask on. Don’t tell him. I don’t want to ruin his childhood.

PS: Son, when you read this article when you are older, I hope that you can forgive me for lying to you.