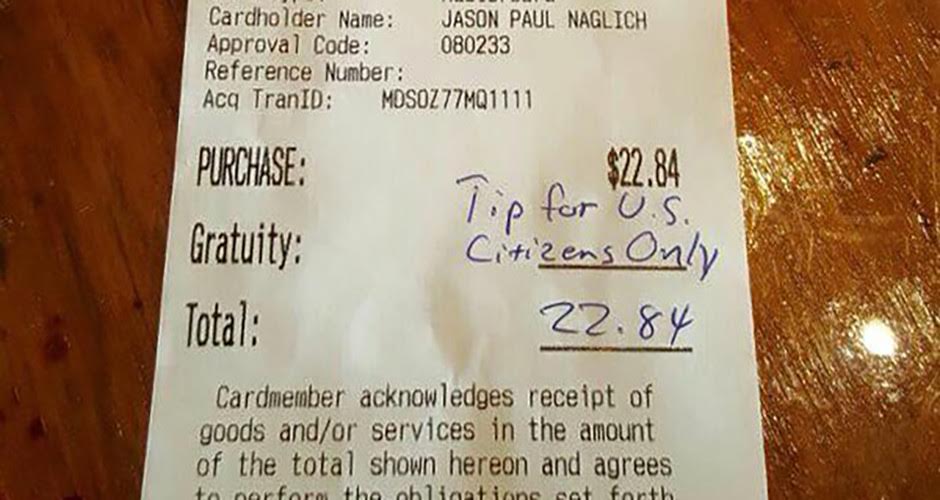 In the past few days, a photo of a credit card receipt has gone viral. The receipt has the purchase amount of $22.84. On the next line, the diner wrote on the gratuity line, “Tip for U.S. Citizens Only” instead of putting down the typical 15-20%. The receipt bears the last four digits of the MasterCard along with the full name of the cardholder, Jason Paul Naglich. There is no mention of the restaurant on the receipt, but we are told that it was from a Thai restaurant in Redondo Beach, California, called Bamboo Thai. The Daily Beast interviewed the owner of the restaurant, he didn’t even know how an image of the receipt got on the internet in the first place.

Naglich is now branded a racist on the internet. Netizens are spreading the story along with his name like wild fire. Some went as far as digging up and broadcasting his home address and telephone number. So far, he has not come forward to defend himself. Who is Jason Paul Naglich? He isn’t even on Facebook.

What’s alarming is the rate of which a simple receipt has gone viral. The internet community gangs up on the guy before we get to hear what he has to say. Was he trying to say that he wasn’t a U.S. citizen and therefore was exempted from paying for tip? I know that’s a stretch. Or maybe he left the line blank and an angry waitress who got stiffed is trying to get even. Same difference, right?

By no mean am I trying to point finger at the waitress, but before we put Jason Paul Naglich on the internet trial, we need to hear his side of the story first.