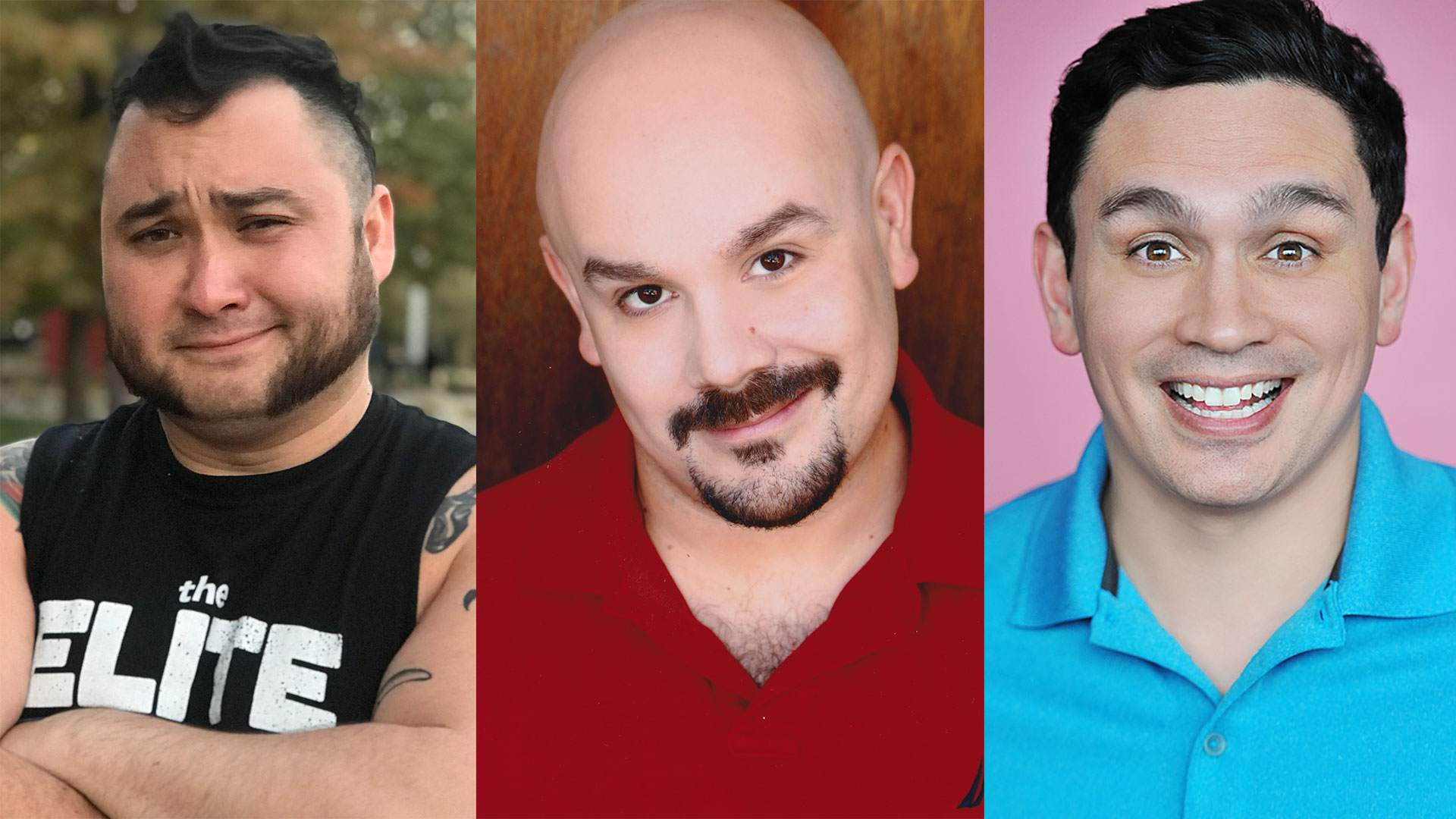 Gay comics Owen Alabado, Dash Kwiatkowski and Brad Loekle alked to CHOPSO about their upcoming live show and taped feature length comedy special Brash Boys Club. Brash Boys Club will be performed live and taped for one night only on Thursday January 30 at 7 pm and 9 pm in Los Angeles at CSz Los Angeles of the El Portal Theatres.

How and when did you decide to start doing comedy?

Owen Alabado (OA): I start doing stand up around 2006.  I was teaching and doing Improv at the LA: Connection Comedy Theater, and someone was like you, “You should do stand up” and I was like “Ok”.  I auditioned for the comedy store they booked me the next week, and then after I killed my first show, the asked me to the Main Room right after.

Dash Kwiatkowski (DK): I’ve been on stage since I was 13 playing in bands and doing theatre, but I never felt PERFECTLY at home with those. I tried an open mic on my 19th birthday and fell in love.

Brad Loekle (BL): Comedy was never where I thought I’d end up in showbiz. But throughout my early 20’s people kept pushing me to try it. Finally a singer friend, who was one of those people, told me “If the whole world is telling you who that they see this thing inside of you… what’s the harm in trying?” So I gave it a shot and it was love at first laugh. And from that point on it was like every blade of grass under my feet was bent in the direction towards where I am today.

In your opinion, why is there a dearth of gay male comedians out there?

DK: Because the white cishet club bookers and comedians don’t make space. “Gay” is still a punch line to the vast majority of people in power in this industry.

BL: That’s a very complex question and I don’t know that there’s one “silver bullet” of an answer. I think part of it is that gay men are still somewhat uncomfortable in seeing reflections of themselves in the spotlight. When hiding or passing as not gay is one of your primary defense mechanisms growing up, then you get a little programmed, at a subconscious level, to get nervous when you see one, lone gay man standing out in a room that isn’t the safety of a gay bar. I also think humor is something gay men cling to and claim as their own, personal crown jewel. A lot of gay men would tell you that they’re the “funniest person at their job”, etc. So there is almost an alpha/territorial thing with gay men and being funny or outrageous. And finally, the truth is, comedians can only get better if they get work. And the vast majority of comedy clubs across the country still don’t book gay male comedians unless they’re already somewhat famous. Just in the last month I’ve had two gay male comedian friends almost lose work or actually lose the booking because the club owners found out that they were gay and their sets discussed being a gay man. So if no one gets to hear your jokes… it’s hard to be funny.

OA: Gay comedians and actors I feel sometimes are looked at as characters who play a persona in the comedy world.  Lesbian comics are more accepted I think because straight male audiences are more comfortable with and accepting to a lesbian comic than a gay male comic.  In my experience I feel like straight men don’t want to laugh at my jokes and I make them feel uncomfortable.  Not always,but it has happened.  I also feel like unless you are a stereotype within the gay community, you can be sexualized on stage.  I have done shows at gay clubs where I have been told, “You’re too hot to be funny”, “You don’t need to be funny”.  I did a show at Hamburger Mary’s once where a guy yelled from the crowd, “Take off your shirt”.  Oh, and one time I did the Burbank Comedy Festival, and the Lesbian MC who has been on Showtime and such, asked me “What are you doing here?”.  She told me I was too pretty, and then when she introduced she told the audience I should be in a GAP commercial.  I put her foot in her mouth when I won “Best of the Fest” that night.   We as Gay Male comics need to break walls and barriers, step up our game and show we can just be as funny and relevant as our straight male counterparts.

What makes you laugh as a comedian?

BL: I really do laugh at pretty much anything. But, as the saying goes… “the darker the berry the sweeter the juice”. So I do tend to lean towards stuff that is darker, more risqué, or more sort of out of this world. A big part of comedy is the element of surprise so I’m always happy when another comedian can surprise me with where they’re going in their mind.

OA: I like humor that you can relate too but has sort of an offbeat delivery.  That is why I absolutely love Ellen.  I like when people get an awkward situation and the reaction is gold.  I am all about the reaction.  When a comic make their life relatable to the audience but yet so off the wall, it makes me chuckle and happy.  Schitt’s Creek makes like that make me laugh out real loud.

What is your set going to be about?

DK: I’m going to talk about my experience as a non-binary and queer comic, my experience being Asian, and some of my past with drugs, alcohol, and my struggles with mental illness.  Also sloths.

BL: I’m a gay man… so of course my set will be all about me! hehe. But we’re going to cover a lot of bases: sex, family stuff, why I haven’t been to a gym since 2003, how I almost lost my left foot in December, why only very short guys seem to be into me… it’s going to be a roller coaster so keep your arms and legs inside the vehicle, kids!

OA: I am turning 40 the week after the show, so lets talk about that! This very single boy  is going to talk about being a half Filipino gay man who grew up in the 90s in a small town in Wisconsin.  Most of my life I have hung out with all straight men which has made my life interesting to say the least.   I also touch on some other aspects of my life that make it a wild ride.

What’s the most memorable place you performed and why?

BL: I’ve performed nude a few times for nudist events, which are often in the middle of the woods. That always seems to be memorable to other people. I myself have blocked most of it out. All I can say, is I wonder everyday if they Purelled all those folding chairs before the next campers got to the site the following week.

DK: Good memorable: a warehouse in Oakland to 800 people.

OA: I sold out a 300 seat theater in my hometown in Wisconsin.  I did my first Hour Set.  It was the best show I have ever done. I got a standing ovation walking on the stage before I said a word.  Having the support of my family and friends and hometown made me feel all the feels.  I was probably the only gay dude in the room and I made a room full of straight people laugh for a full hour.

What’s the worst joke you’ve made?

DK: Bad memorable: a casino in the southwest while the sun is up to two dozen 70 year old trump supporters.

OA: I played the Accuser in the “Michael Jackson Trial Reenactments” on E! TV back in 2006.  I said some very crazy stuff in that TV show.  I made a joke about Michael Jackson, and I don’t think the audience was ready to laugh after the Documentary that just came out.  It was too soon.

BL: I’m sure if I went back and looked at my first 6 months in comedy, I’d say every joke was the worst. But if you mean worst as in, “you’re terrible, Muriel!” worst… I’d say there are at least two shockers I plan on putting in the Brash Boys Club set to see how far the audience will go with me. So stay tuned and gird your loins.

What is your personal definition for success?

DK: I want people to see me and know that you can be asian and non-binary and queer and do the things you love. We have no restrictions. We have no limitations based on how we were born.

BL: A far greater queen than I gave me my definition of success many moons ago. Oscar Wilde said, “To live is the rarest thing in the world. Most people exist, that is all.” And, honey, I have lived at least 6 lives in my 40ish years. I’ve performed and traveled to over 70 countries in the last 10 years alone. Spent 7 years, and nearly 200 episodes, making people laugh with the best cast ever on TruTV’s “World’s Dumbest”. I’ve written for comedy legends and danced on tables with Hollywood icons and childhood heroes. But most importantly, I’ve fought tooth and nail to live my life, onstage and off, exactly how I please. To be entirely myself and my own creation. And I’d call that “being a success” any day of the week. No matter who or what you are.

OA: Being able to do what I love to do and financially be able to have a family of my own some day.  Having kids is very important to me and for a gay man we need to have cheddar ($) to do that.  I would love to sell my tv show “Dudes” and become a force in the industry that is respected.  I don’t need to be a millionaire just someone who can make a descent living doing what I have trained, loved, dreamed, fought for, and everything in between since the day I was born.

What is the one advice you’d give to an aspiring young gay comedian?

OA: As cliche as it sounds, be yourself.  Find what makes you different and what make you, you.   Learn the rules of comedy.  Be relatable and remember you are performing but you are also having a conversation with the audience.  Pretend the audience is your best friend!

BL: A brilliant comedian by the name of Nancy Witter gave me some of the best advise of my early career. And it still rings true today. One of the most important of those gems was this: if you get onstage looking to get something, or take something, from the audience… you’re setting yourself up to fail. If you get up there and give something to the audience, give EVERYTHING to the audience… they will, in return, give you everything you could have wanted back in return. It’s the funny little trick about performing and comedy specifically. To the untrained eye, it looks like we’re up there trying to get laughter from you. When, in fact, if the comedian is doing their job properly, we’re actually trying to give laughter to you.

DK: Find your peers. Find people like you who will watch your back. Find your family and stick with them. Succeed together.

GET TICKETS for #brashboysclub now for the one night only show on January 30, 2020!