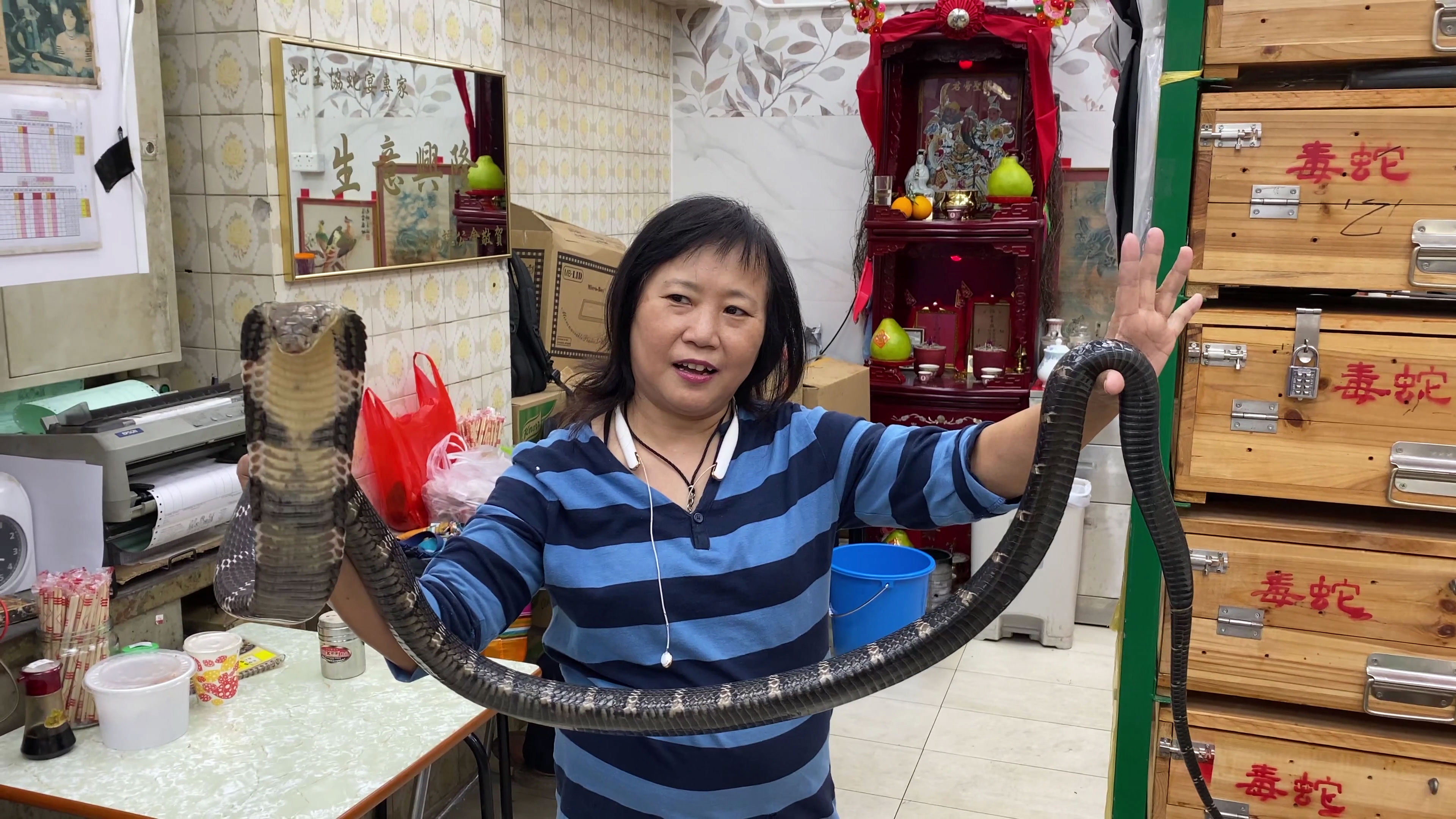 Jericho Li, an MA Communications student at Baptist University, escorts us through Hong Kong’s Sham Shui Po in this cellphone video shot with the assistance of veteran filmmaker Quentin Lee.  What would have been Jericho Li’s group video assignment in Multi-Media Journalism has become a document of the impact of Hong Kong’s 2019 Anti-ELAB protests on herself and the neighborhood of Sham Shui Po.  Although the proposed bill allowing extradition of Hong Kong citizens to mainland China has also been scrapped, protests continue to roil the territory.  Student-led demonstrations on many of Hong Kong’s university campuses came to a climax in mid-November with standoffs with the police at Chinese University, Hong Kong University of Science and Technology, Baptist University and the University of Hong Kong.  Polytechnic University endured a siege that lasted from November 17-29, 2019.

On November 13, Baptist University suspended face-to-face instruction and moved to online teaching for the remainder of the fall term.  Undaunted, Jericho, with the help of director Quentin Lee, continues with her video portrait of Sham Shui Po sans her group members.  In the process, the short film metamorphoses from a class project to dual portrait of a female media student and a grassroots district in turbulent times.  Sham Shuii Po is one of the poorer districts in Hong Kong known for its population of mainland Chinese working-class migrants, elderly residents, and the desperately poor “cage” dwellers who live in notoriously cramped subdivided flats.  However, like other traditional neighborhoods in Hong Kong, it also can be considered a “shopping paradise” for electronic goods, computer equipment, secondhand gadgets and inexpensive street food.

While the divide between the privileged graduate student and the working poor of Sham Shui Po would seem to be unbridgeable, Snake Eaters goes beyond the town/gown, young/old, poor/privileged divide to uncover the range of sentiments that unite and divide the neighborhood.  The politically “blue,” generally supportive of the current government, closer ties to the People’s Republic of China, and strong police enforcement of public order, and “yellow,” representing the protesters whose “five demands” call for the resignation of the current Chief Executive, an independent inquiry into police misconduct, elimination of the term “rioter” to criminalize demonstrators, amnesty for those arrested during the protests, and the resumption of the legislative process that would eventually lead to direct election of the Chief Executive and all members of the Legislative Council, can both be found in Sham Shui Po.   The district has seen its share of violence during the current protests.  For example, on October 10, 2019, there was an incident involving the beating of a taxi driver after his vehicle drove into a crowd injuring a woman.  Although Sham Shui Po exhibited an even split between yellow and blue district councilors before the November 24, 2019, elections, a landslide victory for the pro-democracy camp saw the yellow-sympathizers take 22 of the 25 seats. The Hong Kong Association for Democracy and People’s Livelihood (ADPL), part of the pan-democratic opposition, took the most posts.  Snake Eaters gives us a sense of the political tenor of the neighborhood and a deep appreciation of the anxieties and precarious economic circumstances of its residents.  However, it also provides insight into their unique ability to persevere in the face of difficulties and maintain their cultural identity and integrity.

In the first few moments of the video, we glimpse Jericho adjusting her camera and walking through the lively but impoverished neighborhood.  Quentin Lee (producer, director, cinematographer, and editor) and Jericho Li (co-producer and presenter) interview a cross-section of the district’s residents, including many senior citizens, artisans, and small-business owners.  While some of the district’s elderly residents are illiterate, there is no dearth of talent in the neighborhood.  One vendor, Mr. Hung, who has a background in electrical engineering and radio communications, specializes in used stereo equipment (reminiscent of the shop in which the cop and crook moles played by Tony Leung and Andy Lau encounter each other in Infernal Affairs).  At first Jericho does not seem to process the fact that the elderly man lives in Shenzhen and asks if he plans to move to China.  Puzzled he reminds her that he, indeed, lives across the border in Shenzhen and commutes on a discounted senior citizen train ticket to Sham Shui Po to do business.  The porousness of the border makes life considerably easier for the elderly who can enjoy a higher standard of living in the PRC.

Jericho moves on to interview Mr. Look, over eighty years old, who runs a clock repair store with a fifty-year history.  He shares his plans to close down his shop and complains about protesters interfering with public transportation and destroying street lights.  Indeed, demonstrators target Hong Kong’s MTR mass transit because of their belief the company allows police to control the system in order to make arrests—citing an incident that some feel led to fatalities at Prince Edward MTR station on August 31, 2019.  Some members of the movement also target “smart” lamp posts they believe are used for surveillance.  Elderly and disabled people, who rely on the MTR and adequate lighting to get around the city, have been hit hard by this aspect of the protests.  Also, as Mr. Look points out, the deleterious impact on Hong Kong’s commercial sector has been significant.  A young man running one of Sham Shui Po’s ubiquitous electronic shops concurs that the MTR vandalism and boycotts have had a negative impact on his business, but he feels the inconvenience can be tolerated in support of the cause.Snake Eaters also shows the support the movement enjoys from other local entrepreneurs.  One café, for example, displays Pepe the Frog to signal its “yellow” political sympathies.  In fact, viewers in the United States may be dismayed to find Pepe used as a mascot by protesters in Hong Kong.  Although linked to Donald Trump and the alt-right since 2016, Pepe predates these associations and Hong Kong’s youthful protesters seem largely unaware of the cartoon character’s racist overtones.  (For more background on Pepe, see this short video produced by Bloomberg: https://www.bloomberg.com/news/videos/2019-09-17/why-is-pepe-used-in-hong-kong-protests-video).

The video ends with two portraits of traditional artisans based in Sham Shui Po.  The first crafts paper models of everyday objects, including clothing, watches, televisions, telephones, household appliances, automobiles, and even entire houses, to burn during funerals so that the dead can enjoy these objects in the afterlife.  The last vignette profiles Ms. Ling, the proprietress of a restaurant specializing in snake stew.   She reminisces about larger families making the snake meal a multi-generational affair and proudly gives the filmmakers a tour introducing the various snakes and their medicinal properties.  Jericho samples the snake stew and concludes the video by modeling a living specimen as a scarf.

Snake Eaters does a superb job of acknowledging the impact of the current political turmoil in Hong Kong on the territory’s grassroots population.  More than a touristic presentation of what may appear to be Hong Kong’s old-fashioned and “exotic” culture, funerary rituals, and cuisine, Snake Eaters takes a careful look at Hong Kong citizens, their cross-border lives, and their economic concerns.  Jericho Li does this at a time when other student journalists from Baptist University literally risk their lives to bring news of the ongoing protest to the public.  To cite one example, on December 15, 2019, an undergraduate student reporter from Baptist University Students’ Union Editorial Board sustained a serious eye injury from a tear gas canister while covering the demonstrations.  Jericho Li shows us another side of the story and its impact across generations, gender, class, occupation and status in the HKSAR.