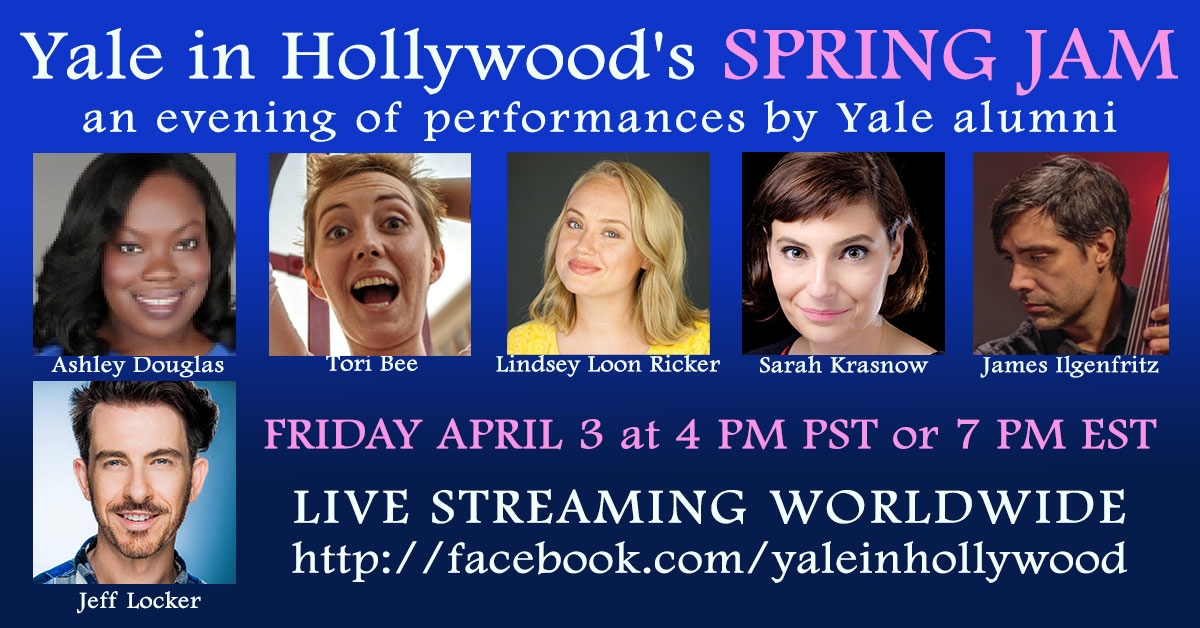 The on-line event also marks Yale in Hollywood’s launch of its public Facebook page where Yale alumni and students will share their talent, performances, shows, experiences etc. with the broad entertainment community and general audiences.

Yale in Hollywood’s inaugural Spring Jam will be hosted by Yale alum actor and playwright Jeff Locker and performers will include:

TORI BEE is a Yale graduate and a comedian based in Los Angeles.

ASHLEY DOUGLAS is a dancer, singer, and actress who enjoys serving as the Talent Chair for Yale in Hollywood. Ashley has trained with Matt Steffanina, Sheryl Murakami, Emily Coates, Philadanco, Koresh Dance Company, and the Anna Marie Dance Studio. She has performed in musicals, her favorites including: “West Side Story,” “Spamalot,” and “Xanadu.”

SARAH KRASNOW is a director, performer, dramaturg, translator, and playwright. She holds an MFA in Dramaturgy and Dramatic Criticism from Yale School of Drama, an MA in Romance Language Studies from Université d’Avignon, and a BA in French from Vassar College. She creates devised, interdisciplinary, bilingual work for the stage. Recent New York theater productions include Knacked at the Brick Theater and I Looked at the Eclipse, a new music opera, at Roulette. Sarah appeared in the feature film Madame de Void, directed by Felix Bernstein and Gabe Rubin, which was on view at David Lewis Gallery in July 2018. In 2016-2017, she performed in and served as dramaturg for the Motherland series by performance artist Cecilia Corrigan at Issue Project Room and the Brick Theater. Sarah also directed her own translation of Le Problème by French playwright François Bégaudeau for the 2015 ARACA Project at the off-Broadway American Theatre of Actors.

Composer and bassist JAMES ILGENFRITZ is recognized in the New Yorker for his “characteristic magnanimity” and his “invaluable contributions to New York’s new-music community.” James has performed throughout the US, Canada, the Czech Republic, Germany, Hungary, Indonesia, Italy, Poland, and Switzerland. James’s notable performances include work with composer/improvisers Pauline Oliveros, Roscoe Mitchell, Rufus Reid, Anthony Braxton, “Blue” Gene Tyranny, and many others. James has received grants from New Music USA and American Composers Forum. He holds degrees from University of Michigan and UCSD. James began New York’s first Suzuki Bass program at Brooklyn Conservatory of Music in 2011, and continued there until 2019, when he left to pursue a PhD in music composition at University of California Irvine. James splits his time between Brooklyn, NY and southern California. His most recent album, You Scream a Rapid Language, was released in December 2019.

LINDSEY-LOON RICKER was in 5th Humor sketch comedy at Yale and sang in Magevet and Glee Club. She starred in the short comedy “Currently Adopted,” winner of Indi.com’s “Best Dark Comedy” award with over 120,000 views. She trained at NIDA in Australia and is represented by Australia’s Gilchrist Management. Lindsey received her B.A. in East Asian Studies and briefly sang in a Japanese pop band. She sees humor as a way to provoke cross-cultural understanding and inspire compassion. We all share love and absurdity.