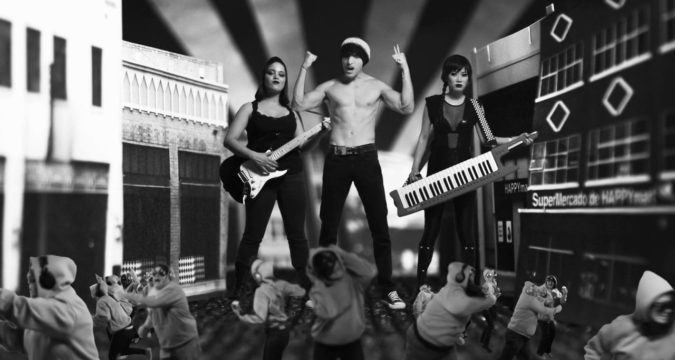 Today, AAM.tv is releasing Akira Boch’s The Crumbles, a dramatic feature about two mixed race twenty-something female punk rockers forming their band “The Crumbles.” Director Akira Boch spoke with CHOPSO about looking back at The Crumbles and his latest documentary short “Atomic Cafe.”

It’s almost been a decade since you made The Crumbles, which I’m a fan of. What are your thoughts about your first feature now looking back at it?

AB: I feel like making The Crumbles was an important step in my filmmaking career. I learned an incredible amount while making that project, and I still relish the experiences of sharing it with the public. Also, I’m still proud of our casting decisions. “Diversity casting” was not yet a thing in Hollywood when The Crumbles was made — and is still far from seriously taking hold — so I feel like we were ahead of the curve in that respect.

Why did you decide to make The Crumbles? What was the inspiration behind a fictional female punk rock band?

AB: I had always wanted to make an indie feature, and I had been working toward that goal on a different project with other collaborators for a few years. When that project hit a roadblock and my collaborators gave up on it, I decided to turn my attention to The Crumbles and make it on my own. So there was some frustration involved, but it was combined with a long term desire to make a feature.

In writing the script, I drew heavily from my own experiences of being in bands from the time I was a teenager until my early 20s. It wasn’t exactly autobiographical, but it was inspired by that time in my life and the friends that I was surrounded by. In terms of making the lead characters female, I thought it would be a lot more interesting to watch young women struggle with the trials and tribulations of being in a garage band than a bunch of dudes.

Can you talk about your filmmaking background? What led you to making your first feature?

AB: I grew up in a small town called San Juan Bautista, California, right next door to a renowned playhouse called El Teatro Campesino. This is where I was introduced to theater and filmmaking by its artistic director and founder, Luis Valdez. I grew up with his three sons, Anahuac, Kinan, and Lakin, and we were always putting on plays and making videos together with our other friends. So from the time I was in high school, I already had a strong interest in filmmaking. I made a few short documentaries while in college, and later went to film school at UCLA. After graduating, I began making documentaries at the Japanese American National Museum in Los Angeles, while also making music videos and short films. All the while, I retained a desire to make an indie feature, so The Crumbles was kind of a culmination of all the work I had done up to that point.

Can you talk about your experience working as a documentarian at the Japanese American National Museum and how that experience enriches you as a filmmaker?

AB: Being able to make documentaries at JANM has been fulfilling in the sense that I’ve been able to tell countless stories that center Japanese Americans, while also conveying our community’s history through a social justice lens. The lack of multidimensional on-screen representation for people of color — specifically Asian Americans and JA’s — has always been a motivating force for my filmmaking, so my work at JANM has provided an outlet for that.

Do you have a dream project you want to make… what would it be?

AB: Haha, I think I have too many dream projects to mention. I have a couple of feature scripts in the works, and I’d love to do a long form music documentary. I’d also love to be able to make films in other countries.

Let’s talk about your latest film “Atomic Cafe.” Tell us more about it.

“Atomic Cafe: The Noisiest Corner in J-Town” is a short documentary that I co-directed with Tad Nakamura. It’s the story of a family-owned restaurant that opened in Little Tokyo, Los Angeles, right after World War II. The owners were Japanese American, and their daughter, Atomic Nancy, took over the restaurant in the mid 1970s. Because she was a rebellious musician at heart, Nancy turned the restaurant into a hangout for outsiders, misfits, and music lovers. It became a center for LA’s punk rock movement, and was the most popular place in town for all sorts of people, from 1980’s pop stars to Japanese yakuza to kids from East LA. Needless to say, making this doc was a lot of fun.

I know it’s at the festivals right now. How’s it going and what are you plans for the film?

AB: We finished this film during the middle of 2020 at the height of the pandemic and decided to send it out to festivals, where it’s done very well. People are really responding to Atomic Nancy’s story and character. It’s won a few awards, and will be a part of the PBS Short Film Festival (which starts July 12, 2021). It’ll continue playing in festivals through this fall, then we’ll make it available online. (Not sure how just yet).

What is one advice you would give to a young filmmaker starting out like you did now?

AB: My advice is to make as many projects as you can in order to develop your craft. You will learn something with every completed project that can be carried over into your next film. You may sometimes feel like you’re not getting anywhere, but all of your work will add up over time.

Stream The Crumbles in AAM.tv now!