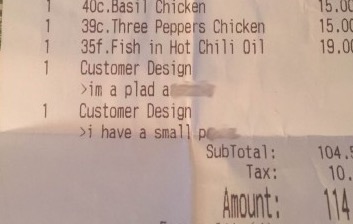 Four employees of a popular Arlington Chinese restaurant who were involved with leaving nasty messages on a customer receipt were fired by their boss. One of the them is the boss’ own daughter.

According to the Washington Post, it all started when four diners, three of them wearing plaid, were served rice at Peter Chang, a Sichuan restaurant. When they noticed that their rice was served in a family-style bowl, one of the diners, who was obviously an expert in all things Chinese since he had lived in China before, asked why their rice was not served in individual bowls. Things got awkward when he zinged the server with “just wanted to let you know that’s the way it’s done in China.”

Apparently, the server was never taught, “the customers are always right,” or heard of Chinese proverb, “you seek revenge, dig two graves.” When the diners asked to split the check American-style, the server sarcastically zinged back, “That’s totally how they do it in China.” (For your information, Chinese people don’t split bills. They make a huge scene in the middle of the restaurant fighting like cats and dogs for the honor to pay. Occasionally, it gets ugly.)

An eye for an eye. You’d think it was a fair match but the server decided to get a one up on the diners. Along with the fortune cookies, the diners were presented with a receipt laden with offensive comments. Towards the bottom of the receipt was written: “im a plad [sic] asshole” and “i have a small penis.” (One wonders if the restaurant has camera in the mens room.)

After the incident, Peter Chang, the boss, chef and the restaurant namesake, quickly fired four of his employees, one being his own flesh and blood, daughter Lydia Zhang because “business is business.” Chang also gave the diners a $20 gift card for their trouble which if they were to use it it on the bill, it would reduce the total to $94.95 and their four-way split to $23.74 (still a lot of dough for a Chinese meal, I’d say). That doesn’t include tip which I seriously doubt if any was left.