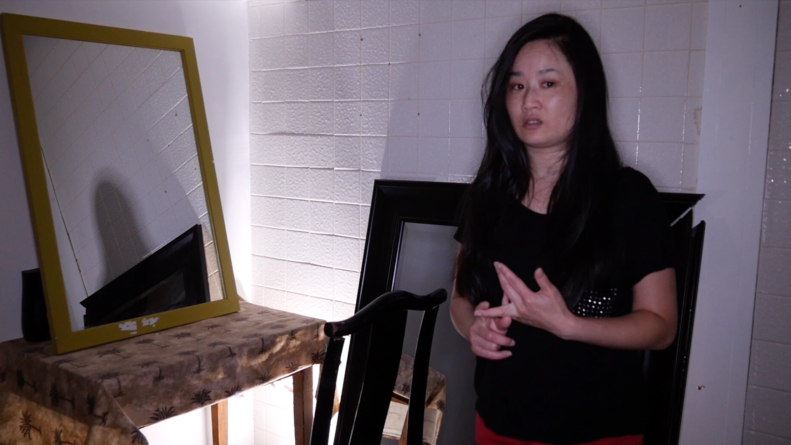 On Twilight Zone Day, May 11, creator Ying Liu will release two full series of “The Haunted Bay,” an independent docu television series about a Bay Area based paranormal investigative team exploring various haunted and spirited sites in San Francisco and the Greater Bay Area on Amazon Prime. Ying discussed the series with CHOPSO.

How and when did “The Haunted Bay” begin?

YIng Liu (YL): I came up with this idea in my video production class at Laney College in the Fall of 2012. We were asked to propose video ideas and it was October so I thought it would be great to make a ghost themed video. I wanted to look into San Francisco ghost legends and document real paranormal investigators. I was lucky to have seen APR in the 4th of July parade in Alameda just a few months before so I reached out to them. They said yes and the timing was perfect because they were just about to run an investigation on the USS Hornet. Everything just lined up and we’ve continued to film them since.

What was your background before making the series? Were you already a filmmaker?

I had no experience making films before this. I acted in a few films and I was an assistant on the documentary, “Seeking Asian Female” in post production only. I was lucky to have had some experienced filmmakers from class, Cody Kulka and Abdullah Salman, join the project. They really helped to bring the ideas to life. Later, independent filmmaker, Matthew Abaya, joined our team, bringing his movie making skills to the series.

Who have been the key collaborators on the Haunted Bay series?

Which would you say is the most memorable episode and why?

YL: For me, it’s The Great Star Theater episode because I was personally touched by a spirit there and maybe even followed. Also paranormal activity kept happening even after we filmed our episode there.

Which is the scariest episode for you and why?

YL: Again, The Great Star Theater because a spirit may have followed me and a few other people I know. That freaked me out! It’s one thing to film spirits in their location and another to have them follow you. But it’s interesting that some places are scarier for some than others. It seems that spirits may choose who to reveal themselves to or individuals are more able to tune in on some spirits than others.

Over the course of making the series, have your initial goals changed from the beginning?

YL: Yes! We started out as just documentary makers. We planned to be flies on the wall, staying behind the cameras, but then paranormal things started to happen to us. We were unexpectedly pulled into the paranormal activity. Also, this series lead me into researching San Francisco history. I have found so many interesting historical locations and details!

Do you believe in ghosts and the after life? Which episode in your opinion proved that ghosts exist?

YL: I do now. I think I always thought I believed in ghosts and the afterlife, but only because I grew up with ghost stories and thought they were fun and creepy. I didn’t really believe deep down.  Now I do, after having so many experiences while filming and also outside of filming. I think the Warfield Theater episode has the most astonishing physical evidence of a ghost out of all of our episodes.

I know you are still shooting… do you foresee a conclusion to the series?

YL: So far we have not made plans to end the series. We make it up as we go, depending on what haunted locations we find. It’s hard to stop because it’s so exciting finding new haunted locations.

Do you have other projects on the horizon?

YL: Yes, we have several episodes to edit still. I have a list of places I would like to go to, but we are holding off until we edit the ones we’ve already filmed.

What advice would you give to a someone starting out wanting to do what you’ve been doing?

YL: I would advise them to find a team and subjects you trust. I have a great team to work with, Cody and Matthew are skilled and reliable filmmakers. I trusted the Alameda Paranormal Researchers because they take a level headed approach to the investigations. They try to look for rational explanations before concluding that things are paranormal. I also have a great deal of trust in June Ahern, the psychic medium and author. I met her before starting this series. I contacted her when my mother passed away and she was able to tell me things about my family that I didn’t even know. I had to contact relatives in Asia to confirm the details. The same happened with guest psychic, Annalisa Bastiani.