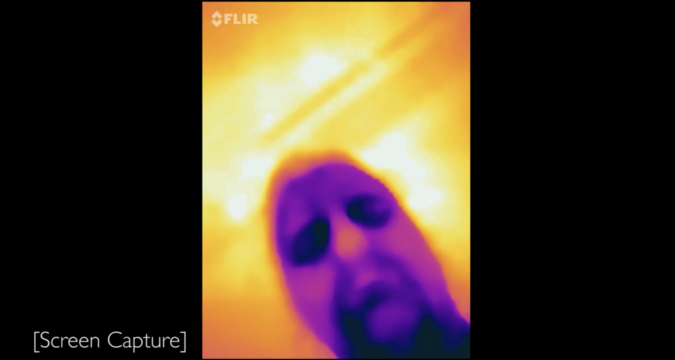 Spice up this Halloween by binging three seasons of The Haunted Bay on AAM.tv! We have interviewed the creator Ying Liu and director of photography Matthew Abaya of The Haunted Bay series where the team claimed they have captured a real image of a ghost / spirit on their Teledyne Flir camera in Season 2 Episode 4 “Warfield Ghost Footage” of the series. Below is the proceeds of our discussion. Watch the Episode now!

Can you talk about the ghost face photo from your Haunted Bay Season 2 Episode 4 “Warfield Ghost Footage” and why that photo, in your opinion, proves the existence of spirits?

MA: I can’t say it’s 100% proof, but it definitely demands further investigation. I have never seen anything like this… and I’ve been to many alleged haunted places.

YL: I also can’t say for sure it’s a ghost photo, but no one has been able to find another explanation. There were multiple things that seemed to make it something paranormal. The Haunted Bay was documenting the Alameda Paranormal Researchers (APR) as they investigated the Warfield Theater. This was in 2017. I and Cody Kulka, another member of The Haunted Bay, both felt a pressure coming out of one of the dressing rooms in the lower level. We thought there might be a presence there and we were scared to go in, even though we didn’t see anything.  This prompted Andronike, one of the APR investigators, to take a photo with her FLIR app on her phone. To our astonishment, a face showed up. Almost all of us assumed there was a rational explanation. I thought that someone must have taken this photo earlier and left it on her phone, but as we watched her press the button again several times, the face kept appearing again and again. Then, the face moved away on its own. We actually slowed down the video so that you can see that it moved without her touching anything. Then Matthew Abaya from The Haunted Bay moved his hand in front of the lens and we could actually see his fingers moving behind the head.  APR did several tests to try to debunk it, but they could not replicate this image. They even wrote to FLIR to ask for an explanation and they could not give any. What is really shocking is that we went back in 2019 and the face appeared again and in this episode you can clearly see Matthew again moving his hand up and down behind the head. This was in Episode 2 of Season 3 titled “Return to the Warfield Theater.”  I also showed clips of the video during a conference for paranormal studies and they also could not come up with a rational explanation.

I know you’ve faced controversy about faking the photo. What do you say to the naysayers who said you planted the photo on the iPhone? You could have theoretically faked it for the show?

MA: Everyone is entitled to what they believe. I swear to it that I witnessed nothing that would say it’s faked. It must come with the territory as there are a lot of faked paranormal clips on the web. I wish there was a way to have other investigators take this case more seriously, but that’s why we have a show. People are out there who are interested in authentic paranormal investigations.

YL: It was actually APR who shared this photo with other paranormal groups and received accusations that this photo was faked. All I can say is that we were there. We watched as they tried to debunk the photo. Cody and I actually felt a presence in that room before she took the photo. I talked to famous parapsychologist Loyd Auerbach about the photo and he says it seems like a real ghost photo. He also said that the gold standard for paranormal evidence is when you have a combination of psychic impressions and technical evidence. This is what we got. Also all the things I mentioned above, the face appearing over and over again, it moving away on its own and us being able to see Matthew move his hand behind the head,  point to something that could be genuinely paranormal. We were there to document what paranormal investigators and mediums do so we see the whole process. In the 10 years we filmed APR, we have never seen them fake anything. On the contrary, they debunk most of the things they detect before ever concluding that it might be paranormal.

Can you explain the Teledyne Flir camera and how it could capture the image of a spirit?

MA: Flir cameras are intended just to capture and measure patterns in temperature. Flir does not market its photographic equipment to capture paranormal phenomena, however it is widely accepted as a means to do that by investigators in the field. Some theorize that if paranormal entities exist then they must give off some kind of energy and affect environmental temperature. In this case, we documented the Alameda Paranormal Investigators (APR) getting a cold spot that appeared to be a man’s face. There was no mistaking what we captured, but it remains debatable how the face appeared. The camera was tested and there were no defects found. With any experiment, one needs to be able to repeat the experiment and get the same results. Two years later, we documented APR capturing another cold spot that looked like the same face, but from a slightly different angle. I was there to witness both incidents and I can verify that I did not witness anything that would indicate something faked. I was fortunate to have my cameras rolling and present this on The Haunted Bay.

YL: I think Matthew Abaya gives the best explanation below. APR actually sent the photo to FLIR to ask for an explanation why a face like that would appear. They could not give a good answer.

You said once you started making The Haunted Bay to question if ghosts / spirits exist. After making three seasons, are you sure of the spirits existence?

MA: I have always been a skeptic, but there is a side of me that wants to believe that there is more to life than the one we are currently living. So far, I have seen nothing that would make me believe in the existence of ghosts or spirits, but this one case has me really scratching my head. Maybe we finally found something. I’m waiting for another paranormal team to find evidence that matches what we all experienced at the Warfield Theater to support our APR’s findings.

YL: I thought I was a believer, but as we started filming, I realized I wasn’t really deep down, that I just wanted to believe because it was fun and spooky. But things changed quickly when we started filming. We had planned to just stay behind the cameras and document the paranormal researchers, but then things started to happen to our crew. In our first episode, one of our former cameramen, Abdullah,  was a complete skeptic and he even ridiculed paranormal investigations as being stupid. But at the White Horse Bar in Oakland, he suddenly started to feel something push down on his shoulders and he couldn’t swallow. This happened everytime the K2 meter registered a spike. He was visibly shaken. I also started to sense spirits and my impressions were corroborated by sensitives and mediums. I felt an aggressive presence in a cold hallway at Preston Castle and quietly moved behind everyone to feel safer. I felt like something could attack me, but I didn’t say anything. Next thing you know, APR’s team sensitive says she sees a presence at the end of the hallway and when she tries to approach it, it jumps at her screaming. I never said anything to her before that so she had no idea I moved because I was scared of an aggressive energy. I also felt a female ghost at the Great Star Theater and actually saw her in my mind’s eye. I could dismiss it as just my imagination, but several other people saw her at different times also and they all described the same thing- a woman in a white dress. It was almost embarrassing to say this because it seems so cliche, but that’s what we saw.  She even appeared in my home and scared the living daylights out of me from 11pm to 1am. The next morning again, I thought I had imagined it, but then a friend texted me that around 2 or 3am she saw the spirit at her home. She had no idea that I had experienced the same right before her. And then of course there are the photos and videos at the Warfield Theater. It’s the best paranormal evidence I have ever seen on camera and it’s just mind boggling.

Are there any other evidence of spirits captured on camera in other episodes?

MA: There have been some scary moments, but nothing as exciting or convincing as this.

YL: The only other thing that we captured on camera was a door closing on its own when we asked the ghosts to close the door. This happened on the USS Hornet and is only on our Youtube Channel in the Return to the USS Hornet episode. APR has caught some impressive images on the  USS Hornet. We were not there, but I think there is a thermal image of a sailor. It is very hard to capture evidence of ghosts on camera. There are many psychic impressions and some audio evidence, but images on camera are pretty rare, at least in our experience. I don’t know if it’s because of technological limitations or if it depends on whether the spirits want us to see them. If it is a ghost, the one at the Warfield Theater, seems to really want to show himself to us.” This is funny, because in the Return to Warfield episode we explain that it might be a former photographer who loved to photograph musicians there when he was alive. He has a love for cameras.

What are you working on as a creator most currently?

MA: I am just writing another screenplay and hoping to start my 2nd feature film project.

YL: We took a long hiatus because the pandemic made it difficult to film indoors safely. Right now we are discussing putting together one of the scariest places we have filmed in. It’s just a plain office and warehouse, but things that came up were out of a horror movie.