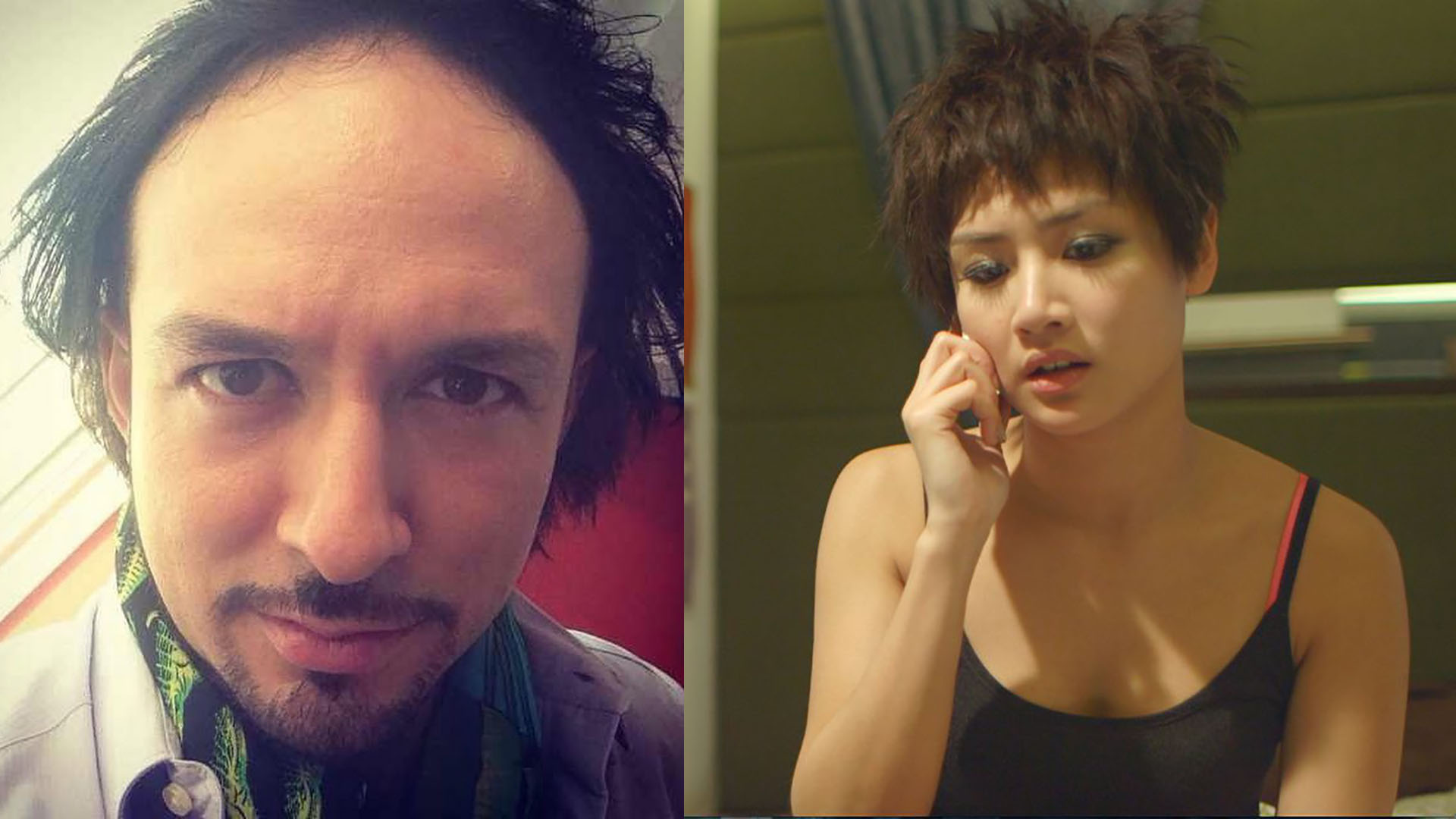 C: How did you come to filmmaking and how did you end up in Hong Kong as an American?

I grew up writing stories. Throughout my life, I always seemed to be alternating between class clown and shy introvert and guess that’s because I had all these ideas floating in my head and kind of struggled with how to outlet it out. So I wrote a lot of weird and whacky stories and showed them around to friends and classmates as a way to give people a laugh. But I never really thought of doing anything serious with it.

When I went to NYU for college, I studied business because that’s what I figured people do with their lives. While there, I would bump into all these people studying film and drama and it blew my mind a bit because actually making films had always felt like such an out of reach, abstract concept growing up. Meeting film students and watching the works of that whole generation of indie filmmakers like Kevin Smith, Tarantino, Robert Rodriguez, it really humanized the art form. I connected with it and I got inspired. I mean, here was a way to tell stories and really bring them to life and it didn’t necessarily take a big studio and millions of dollars to do it. I couldn’t believe that it didn’t occur to me to study film instead of accounting.”

So I started trying to write screenplays, fumbled around a bit, bought Syd Field’s book, took some workshops, started again and eventually wrote my first screenplay while I had downtime at my first job out of college. Eventually I started shooting these stories myself because 1. I figured no one is going to want to film my stories, and 2. The economy tanked and I got laid off from my job so I had nothing but time on my hands. So, I borrowed my Dad’s handicam and started shooting my first short films.

As for Hong Kong, I ended up here because of my wife. When we were still just dating, I felt like it was time to get out of New York. I needed to make a change and wanted to chase the dream and head to L.A., give it a real shot as a filmmaker. I tried convincing my girlfriend to join me on this adventure, but she looked around at the job market and she would have had to take a big cut in salary compared to NY. Then one day, she came to me and she got offered a chance to go to Hong Kong and asked me what I thought of joining her. She was getting offered twice as much salary as in New York and then I could focus on my filmmaking. Literally the moment she said it, I told “Yes, of course! Let’s go.”

It hit me that over half the movies I was watching and getting influenced by then were movies from Hong Kong and Asia, in general. How could I pass up the chance to go to the Hollywood of the East? So we packed our bags and then the rest is history.

C: How did Love Stalk your feature come about?

It started off as a quickie weekend short film project. I had worked with Angie P. (who played Sharon and was one of the Producers) and Jae Leung (who played Ricky and was one of the writing team) on a project that won a local short film contest. We liked working with each other and tried to do it again, this time wanting to do something with a bit of Singaporean flavor to bring over to a film festival over there. Angie and Jae both grew up in Singapore.

We brainstormed and decided to go with a combination of our ideas. I wanted to make a thriller about a serial killer. Angie wanted do a story about the pros and cons of social media use. Jae wanted to do a romantic comedy. So I got to work and wrote a romantic thriller about social media addiction and dating. I tend to like to deconstruct genres, play with their typical conventions and expectations in a story, and turn them on their head. One thing that really intrigued me with writing Love Stalk was the idea that many of the tropes of the typical romantic comedy actually would be pretty creepy in real life practice. So many movies showcase their romantic leads straight up stalking each other, but then it’s portrayed as endearing. No one minds standing outside a girl’s window blasting a boom box if you’re John Cusack in a movie, but if I tried it, I’d get the cops called on me. But then, what if the romantic lead turns out to obsessed or psychotic then the love story would turn out a lot differently.

The short film got some good reactions, so then we worked on expanding the story into a feature film, tried to raise money however we could, eventually going with crowdfunding and a few private investors and sponsors that we managed to sell on our vision. Overall, I’d say from beginning of the short film development to end of producing the feature, it was about a four year process to get it ready for screen.

C: What’s one thing you want the audience to take away from Love Stalk?

That technology can a be handy and helpful tool, and it definitely makes the world a smaller and more interconnected place, but nothing can truly replace having trusted friends there next to you in the flesh.

C: Can you talk about being a foreigner and directing Love Stalk in Cantonese, a language you don’t speak? What’s the process?

It was a tricky process for sure. Early on in writing the feature length script, we all really felt Cantonese was the way to go. For me especially, I really wanted to give it a shot because I came to Hong Kong to make “Hong Kong” films. I wanted to make something that could live up to all the HK filmmakers that I idolized and I wanted to make it as authentic as possible. But I still wanted it to keep my own particular flavor.

Striking that balance was tricky because I was writing the script in English at first, with the idea to translate it and localize it, but of course a lot of the humor that I was writing just wouldn’t translate. I worked with Angie, Jae, and our other writers Sinlam Ng and Thera Lee to make sure that, as I was writing, everything I was putting in there would ring true from a cultural standpoint. And then as we were translating and rewriting the script, we went through, line by line at times, to make sure that it would still keep the essence of my original vision. That took a long while, I think we spent nearly a year rewriting.

Then once we cast, I insisted that we needed rehearsals, as many as possible, before we get to set. I wanted to actors to not just to know and say their lines, I wanted to give them the freedom and power to discover their characters, workshop them, change dialogue to make it more natural and authentic, if need be. I knew that I wouldn’t have the luxury of doing that on set. With the tight shooting schedule, if we started doing rewrites, trying out different things, etc on set, I’d quickly lose control of the film. So we wrote that all out as a team. Then once on set, I had a great Assistant Director team, as well as a great producer in Sophia Shek that watched my back, made sure the cast keep to the essence of the script, even if they took liberties, kept us on schedule, let me know when something wasn’t working right and needed adjustment. When I needed to give direction team really helped me to get my message across. So I think it really boiled down to trust, preparation, and on my part, learning at least enough Cantonese so I could keep pace. In fact, the few times I really insisted on sticking to the script was when someone missed a word or phrase that was helping me keep pace and rhythm. I’d be like “Hey, why didn’t you say ‘pok gai’?” I need that pok gai there!

C: What would be one thing you want to change about the film if you have had the experience now?

In all honesty, there are a few things I would have changed if I knew then what I know now. A big thing is I do wish I would have given the script another going through, add some more mystery solving set pieces by Dada and Angie’s character and a bit of a closer look at what Ronan had been doing behind the scenes. There was some set pieces that we shot, but ended up on the cutting room floor because the original script was really heavily focused on the romantic comedy aspect and to make for a bigger surprise for the thriller end.

C: What’s your favorite moment in making the film and why?

One of my favorite moments in the film was actually my little cameo in which I kind of pulled a little bit of a joke on Angie.

Due to a scheduling conflict, I had to jump into the role of Carlito, the over demanding client. We didn’t really rehearse that scene, but I wanted it to be over the top and really get Angie to bring out in Sharon this kind of “What did I just get myself into” kind of performance. As we were doing make up and hair, Angie was finishing up before me and I casually asked her, “what do you think if I do guyliner for Carlito?” Angie said she didn’t think it fit the character and told the make up artists no guy liner.

As soon as she left, I told the make up artists I needed extreme guy liner, put it on thick, and big hair, make me look wild. Angie still didn’t know what I was going to look and act like until the very first take when I walked in and looked at her with these crazy eyes. She held character, but she was kind of fuming that I completely did the opposite of what she thought. Worked great for the scene though. Sophia directed that scene and loved it as well.

C: What are you making next?

Finishing up a short film that I directed as a dark comedy take on sitcoms. Plus, I’m back to writing. Working with a friend to write a slasher film and fleshing out a story for a sex comedy that I’d like to do as another Cantonese language film.