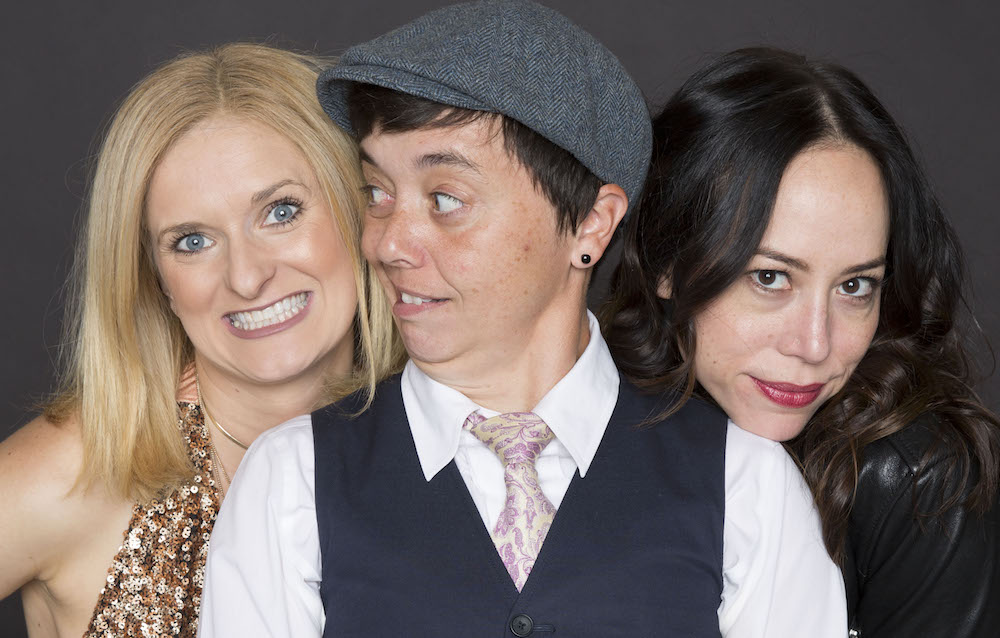 Female comics Kimberly McVicar, Melanie Maras and Leah Mansfield talked to CHOPSO about their upcoming live show and taped feature length comedy special Brash Girls Club. Brash Girls Club will be performed live and taped for one night only on Thursday March 29 at 7 pm and 9 pm in Los Angeles at CSz Los Angeles of the El Portal Theatres. How did you get into comedy?

KM (Kimberly McVicar): I was on Talent Time at 5 Years old for dance and got a laugh from the audience during the interview. I was hooked ever since.

MM (Melanie Maras): I knew I wanted to do comedy when I first saw FAWLTY TOWERS as a kid and became completely entranced by it. As a young girl growing up in Indonesia, did I feel like Basil Fawlty, a grown-ass English man and fictional character from the seventies, was my actual friend and the only person who really understood me? Maybe. John Cleese was my first comedy hero and I’ll always strive to give audiences the extreme joy he gave me.

LM (Leah Mansfield): I was in the Air Force for 5 years, and my last Christmas that I was in, I was asked to host the squadron’s Christmas party. I was extremely nervous and chugged 3 beers before we started the party. Once the party was up and going, I had a great time hosting. Everyone laughed and had a good time, and it was the first time it occurred to me that maybe I could do stand up. It still took a year-I separated from the military, traveled around Europe, and went back to Colorado. It was 3 months after buying my first stand up book that I actually got on stage and started this long journey of self awakening.

What is your set for “Brash Girls Club” about? KM: My set is mostly about my family. MM: My set for BGC is about shame, love, labia, and perse-fucking-verance in the face of adversity. LM: Since I haven’t filmed a special before, it’s full of jokes that have been in my act for years. Stories about my crazy family, my time in the military learning to launch nuclear weapons, and I do talk a little bit about being gay.

What’s the most memorable place you’ve performed and why?

MM: I would say performing in Finland at the semi-finals of the Laugh Factory Funniest Person In The World Competition. There was so much pressure building up to the show and I was completely terrified. I was so worried that the audience wouldn’t understand me but they gave me so much love. Another memorable show was the Disney Princess Roast Battle — I was Moana and becoming a Disney Princess was an actual dream come true.

LM: One of my favorite memories was doing a show at the Music Box Theater in Minneapolis in 2010. I opened for Tig Notaro, and bombed my set horribly. I learned some important things that have stuck with me to this day, and earned a huge respect for Tig Notaro and how headliners should act. The comedy scene used to be very male centric. Did you find it that way when you started?

MM: Sometimes I’m still the only woman on the lineup of a show! But I can’t worry about what anyone else is doing. I just have to strive to always do my personal best.

LM: Hahahaha “used to be”. The comedy scene still is, and always has been, very male centric. The recent strides women comics have made have only begun to tap into the surface and women still have a very long way to go. Also, I hope mothers stop coddling their sons. All men seem to think that whatever comes out of their mouth is worth listening to, and it’s not. But boy are men brought up to think so. When you see comedy actually become equal, you’ll see that women are FUCKING HILARIOUS.

What do you think is the difference between what male and female comics do?

LM: Hopefully nothing. Joke structure is the same regardless of gender. That’s what we’re working toward, anyway. Do you think it’s important for female comics to have their own space or show?

KM: I do think it’s important more young females see people like them doing what they love.

MM: It’s important for every kind of comic (accept unfunny ones) to get a space to feel free and express themselves. I think what’s most important is that women support and build each other up.

LM: I think it’s important for women to feel safe wherever they go. The only reason women create women-only shows, festivals and the like is because women don’t feel safe in normal comedy spaces. I can’t think of a single female friend who’s been in comedy more than a couple of years who hasn’t been harassed. There’s no HR to vet the creeps, no background checks, no checks of any kind really to see if the guy comic who’s claiming “but I’m a nice guy” is actually nice. That’s one of the reasons women build vast underground networks online-so they can warn the other women who to watch out for. Ultimately, this is a male comic problem. Male comics need to watch and listen and start standing up to other men. Men need to be setting the example for how men act, and hold those other men accountable. There’s no reason for a woman only safe space if we trusted the men around us.

MM: I’ve told some molestation jokes which I find hilarious but no one else seems to so I’ve let them go. Feels like something I literally shouldn’t touch. What advice would you give to aspiring female comics just starting out?

KM: Just keep it up. The more you do the better you get. (Hopefully)

MM: DO YOU. Keep going. Don’t compromise. And don’t leave your drink unattended.

LM: Make a friend. Write jokes and keep each other safe. Find people interested in the same comics and get together and talk shop with them. Don’t beat yourself up either-we’re all on a journey and no two comics have the same one. And have as much fun as you can on stage. It’s a weird job, and it’s really only great when you are having fun.

Buy tickets for the shows and help them make their special super special!