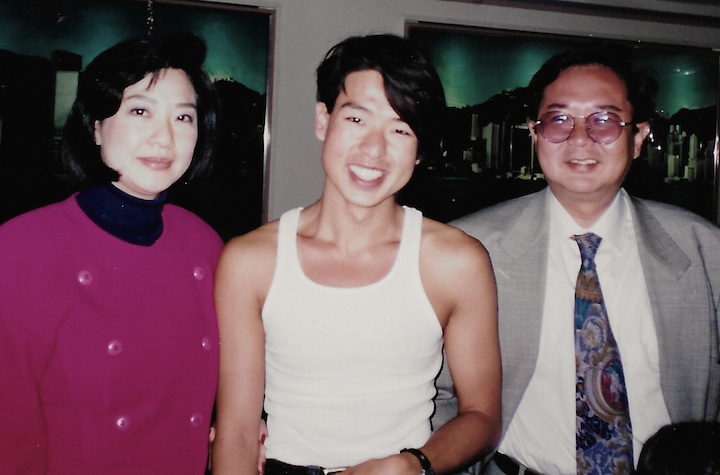 I have to say when I watched ABC’s Fresh Off the Boat and no matter how much I love Randall and the cast… I just didn’t feel that show represented at all the immigrant experience with fake Asian accents and contrived comedy. This is coming from the perspective of a real FOB, namely moi. When I first learned about the term FOB, I would tell people that I was in fact an FOP, Fresh Off the Plane. I didn’t come to America on a boat.

You realize that even the term FOB doesn’t reflect Asian immigration. I’m not sure if you’ve seen the 1961 Asian American classic Flower Drum Song where the protagonist refers to herself as a “wetback” which is more of a derogatory word for illegal Mexican immigrants. I’m sure that “FOB” evolved from the water symbolism of “wetback” bearing little reality to how Asians came to America.

Neither of my parents made it through college. My mom graduated from high school and became a flight attendant at BOAC (precursor of British Airways). My dad dropped out of college in Hong Kong to marry my mom. In 1986 when I turned 15 we immigrated to Montreal, Canada, dreading the Communist takeover of Hong Kong in 1997.

Two years later, I landed in US at 17 as a student of the University of California at Berkeley. We never did the college tour… but my dad did come out to Berkeley with me and made sure I was settled into the upper bunk of my tiny triple dorm room in Cunningham Hall of Unit 2.

I remember a couple of weeks after school started I turned 18. That night, I walked around Berkeley until the campanile bells struck midnight. I sighed and thought I was finally so old. In the blink of an eye, it has been 28 years and I’m having a child who will be second generation Asian American—half Chinese and half Korean by design.

I came to America because I fell in love with California the first time I was here when I was six. I came to Berkeley because I thought it would be a step closer to film school at UCLA. And I eventually made it there at my third try.

When I finally graduated from UCLA Film School, with two features down my belt, I applied for my green card as an alien of extraordinary ability the year before Clinton left and got it. I applied to become a citizen the year after Obama got elected and got my citizenship interview.

That day at the Homeland Security building in downtown Los Angeles, I studied hard and showed up at the interview. I was nervous. They called me in and sat me before a middle-aged Vietnamese immigration officer with a thick file on me.

“Who’s the president of United States?” asked the immigration officer with a thick Vietnamese accent.

I was taken aback for moment.

“What’s the capital of America?”

“Please write down the sentence ‘Washington is the Father of our country,” muttered the Vietnamese man with thick accent.

“O.K.” I wrote the sentence on a piece of paper and showed him.

“You sure you don’t do any drugs?” he asked again.

“Now where did you learn to speak English like this?” he asked.

“Well… I studied English at Berkeley. And I got my masters in English from Yale University.”

The immigration officer made a grunt and grabbed my file. He went outside and stamped my papers. I guessed I passed.

A couple weeks later, I went to my citizenship ceremony. I was feeling it was more of a pain being herded with thousands of immigrants into the convention center downtown to wave the flag. When Obama spoke through the TV screen and the national anthem played, I was surprisingly moved as images from my twenty years in America flashed before my eyes.

I came to America, and my son will be born American.

*The above photo was taken with my parents on the night of my Berkeley graduation.